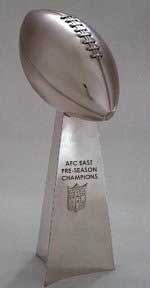 No, thatâ€™s not a typo. I said Dynasty. In case you havenâ€™t heard the New York Jets are the two time defending AFC East Pre-Season Champions. Not just one but two time defending champions.Â  The Jets are one of the most storied franchises in sports and for good reason.

First of all, the Jets have won a superbowl, in 1969. It wasÂ only 37 years ago. The taste of that super bowl win is no doubt fresh in the hearts of those Jets fans that were alive back then and are still alive even today. For example, a 52 year old Jets fan in 1969 has only had to wait 37 years without a super bowl win and is still only 89 years old! Now to the new millennium of New York Jets football! Started by Herman Edwards taking over from Bill Parcells/Al Groh, Edwards led the Jets with his brilliant motivational speeches andâ€¦.three playoff appearances in five years! Anyhow, the Jets are now lead by Coach Eric Mangini and GM Mike Tannenbaum.

They are surely on their way to leading the Jets to a super bowl win and thanks to Herman Edwards, they inherit a team that has recently been on the winning side of the coin. Forget the playoff games he threw away or the sneaky rat-like escape he made after a disastrous 4-12 season that had Jets fans once thinking super bowl, those meaningless regular season and playoff games didnâ€™t mean a thing!Â  Because the Jets are the two time defending AFCE Pre-Season Champions!!! Mangini and Tannenbaum inherited a talent rich team and made them even stronger with a solid free agency campaign and a very strong April draft. With a history of solid coaching and sound game day tactics from the previous regime, the New York Jets led under Coach Eric Mangini are on their way to defend their crown of the two time AFC East Pre-Season champions. If the Jets can somehow under the holy name of Joe Namath, successfully defend their AFC East Pre-Season title for a 3rd time in succession this season, the Jets will have firmly put their stamp in the NFL record books.

Three straight AFCE Pre-Season championships would allow the Jets to be labeled a DYNASTY.