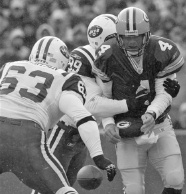 The NY Jets improved their record to 7 and 5 with a commanding 38 to 10 win over the Packers at Lambeau.Â  The Jets played a flawless first half and led 31 – 0 at the intermission.

Pennington had a solid game (25/35 – 263, 2 TDs) and engineered scoring drives on the Jets first 5 possessions (1 field goal, 4 touchdowns).Â  Eight receivers caught passes as the offense had 263 yards passing.Â Â  The Jets rushing attack also came to life led by Cedric Houston who had his best game as a pro (105 yards, 2 TDs).Â  Brad Smith had the Jets longest run from scrimmage this year, gaining 32 yards on a reverse.

The defense continued their rebirth which started after the bye week.Â  They sacked Favre twice (Thomas 1.5, EllisÂ .5) and even though they gave up some yards on the ground, they kept the Packers out of the end zone.Â  Factor in interceptions by Kerry Rhodes and Andre Dyson and you have a rout.