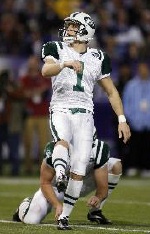 The Jets came out focused, played a complete game and beat the Vikings.Â  It is the Jets third straight victory on the road.Â Â  Facing a Vikings run defense that is very stingy, the Jets opened it up in the air.Â  It paid off as Pennington threw for a career high 339 yards.Â  The offensive line gave Chad a lot of time and he made the throws.Â Â Coles had a big game pulling in 12 catches for 144 yards and a touchdown.

Besides Chad, game balls would have to go to Mike Nugent who continued his solid season.Â  Mike had four field goals including a 52 yard that had plenty of distance.Â  Dewayne Robertson had a very solid game adding 6 tackles (4 solo).Â

The defense played a good game and they were aggressive, blitzing often and had 3 sacks (Hobson, Barton, Mosley).Â  This win keeps the Jets playoff hopes alive.Â Â They still need help to make the playoffs but it isn’t impossible.Â  Click here for more info on the playoff implications.