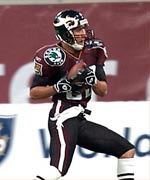 General Manager Mike Tannenbaum said that Wong, a native of Mexico, would receive an International N.F.L./E.L. exemption on the Jetsâ€™ roster.

Wong would have to be considered an extreme long shot to make the team.Â Â  This past season in NFL Europa he had one reception.Â  In 2006 he had three receptions.