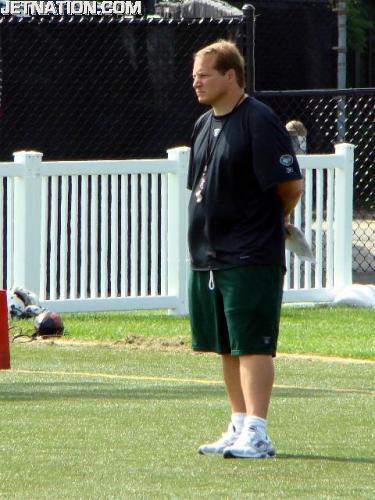 Today was another warm day, with the first set of actual full contact drills. The practice ran for about 2Â½ hours. Practice consisted of some of the following drills:

For the kicking portion, Graham consistently was averaging 50+ and booted one over 70 yards with the wind at his back. Nugent went 3 for 3 from over 50 yards.

Although it was prepractice, Stuckey did not drop a single punt, unlike Smith and Miller.

Once practice began the team broke up into individual units, and were doing speed and agility drills. On the offense the most agile players were Wade Smith (OL), Penny, and Graham. Adrien Clarke and Brandon Moore seemed a bit slow footed.

The 1 on 1 tackling drills was the most entertaining portion of the practice. One offensive player ran at the other player with the ball and tried to get past them. On one of the first runs, Darien Barnes bowled of Kerry Rhodes, bringing a roar from the Fans. Jones juked out Hobson, while Harris did a solid job on his two tackles. The most entertaining tackle was the last one of the day Cody Spencer laid a monster hit on Alvin Banks, so hard that Banksâ€™ helmet flew in the air as he was planted in to the ground. All the defensive players ran out and started jumping on Spencer in celebration. To put it lightly, Banks was jacked up.

The next drill was a KO/Punt return drill. Stuckey showed good vision finding some nice openings. Another highlight was Cody Spencer who bounced off a blocker and laid out the returner behind the blockers.

In the individual drills, I tried to keep my eye on the defensive line to see who was the quickest and was the most agile. Robertson looked very quick, and Pouha ran pretty well as well. Kenyon Coleman had a good first step.

In the 1wr vs. 1 cb drill, Pennington was like an artistâ€¦having good touch with his throws. He was working on the post corner routes, trying to hit the wide receiver in the corner of the end zone. McCareins made a nice catch, keeping his feet in boundsâ€¦as did Brad Smith.

In 7 v 7 drills, there was no secondary and receivers, as the team focused on the running game and play action play with the TE and RB. On one play Pouha got into the backfield and would have tackled Jones for a loss. After the whistle he ripped the ball out of Jonesâ€™ hands much to Jonesâ€™ disgust. Later Wadsworth gave aÂ welcome to the new running back Tony Fisher as he laid him out and knocked his helmet off.

During the next drill, the 11 v 11, both Bender and Brick had false start penalties and had to run a lap. On a fake reverse, Hobson looked flat-footed and stopped his pursuit of the ball. Also Barrett didnâ€™t hold the end giving Thomas Jones the sideline to run. Later in the drill, Tui audibled at the line, and handed the ball off to Ware who ran untouched for the first 20 yards before diving into the end zone.

In the punt recovery drill, Graham pinned three very nicely around the 2 yard line. Wright made a nice play on one ball keeping his feet in bounds at the 1 yard line.

In the final 11 v 11, a 2 minute drill exercise, Mangini blasted â€œPressureâ€? by Billy Joel and â€œUnder Pressureâ€? by David Bowie and Queen. Pennington made a nice toss to Cotchery on a 15 yard out. Pennington got the team into field goal range, but Nugent missed the 51 yard attempt. Clemens then stepped and had the only success he had the whole day, making crisp passes to Stuckey, and Kowalewski on his drive. He then hit Brad smith on a 34 yard go route for a touchdown. On another drive Clemens lost track of the clock and had to throw the ball out of bounds with 2 seconds left to make sure there was enough time for a field goal attempt. On the field goal attempt Nugent missed a 41 yarder which ended the practice.

Cody Spencer had a very good practice, making big hits and getting into the backfield on a few plays. Although with our linebacker corps it is unlikely that he would get much playing time, he definitely was noticeable on the field.

Clemens once again looked poor out there on the field. He just doesnâ€™t look fluid on the field, missing receivers low on many throws. One thing which I noticed is when he receives the ball from the shotgun, it takes him a second to begin his drop. In a robotic motion he catches the ball, and then gathers it in his hand where he could throw it, and then begins his drop back.

Stuckey continued to impress me out there today. He has not dropped a pass or punt in the 3 training camp sessions

Brick was impressive on the 3 v 3 drills, as he was consistently pushing back the D-lineman.

Pete Kendall definitely wasnâ€™t hiding his dislike of the Jets. He was the last person to do any drills, and was always a step slower than the rest of the team. On the field during the drills he wasnâ€™t noticeably as bad, but he secluded himself from the team. When the team was on the sideline, he left himself 10 feet away from any other player, taking a knee, and some heckling from the fans.

Leon Washington did not practice again.