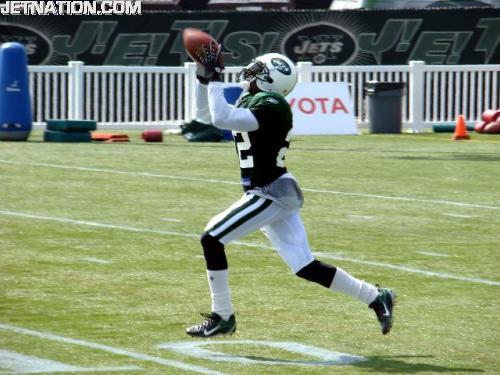 It was a scorcher out there today. Once again the team worked on a lot of different things in separate units, as well as coming together for 11 on 11s, and then back to splitting up into groups and working on more stuff. Most of the practice was on the grass field nearer to the parking lot.

After doing some walkthroughs and then stretching in their new rockette style exercise, they went into combine drills and one on one tackling drill.

Baker stretched but did not put the pads on today. Kendall practiced, if that’s what you want to call it. He stands by himself and doesnâ€™t talk to anyone except for one assistant coach. He’s created this pariah persona, but I donâ€™t want to spend any more time on him.

Rhodes led off by tackling his man, but for the most part the ball carriers continued to evade the tacklers. In a duel of budding playmakers, Eric Smith brought Leon down hard. WR Evan Prall broke someone’s ankles on his move. He probably will get caught up in the numbers game at WR, but I wont be surprised to see some other team pick him up for a look after the Jets cut him.

Dyson was back at practice, but mostly ran with the second team today.Â  Two guys, 59 and 84 practiced- they are not on my roster. There also was a new 32 in camp who I guess was not Tony Fisher.

They ran the 11 on 11 two minute drill. The first team offense moved the ball well, as Chad hit Cotchery and Coles on nice completions, and TJ continues to run well. Barnes does a nice job blocking for him. Banks was VERY impressive today, too. He has the size to run between the tackles, and is getting plenty of contact in during tc. I donâ€™t want to jinx him, but he’s a keeper.

The second team did not move the ball as well, and other than Clemens always seeming to find Stuckey for a completion, not much was happening for him.

After one play, Bobby Hamilton remained down on the ground, and either he was knocked out or had the wind knocked out of him. He stayed down a good 2-3 minutes before getting up on his own. He did not return to practice.

Stuckey also continues to be impressive, and he made a beautiful tumbling catch on the sideline that was ruled out of bounds, but a nice catch nonetheless.

Ware had to take a lap, though I didnâ€™t catch what he did to justify the punishment.

I watched the DBs a lot today. The first team today was Coleman and Rhodes at safety, with Barrett and Miller at CB. Barrett has a cast on his LEFT arm up to his elbow. Someone in the press reported it was his right arm-WRONG.

Second team DBs were E. Smith and Rashad, Dyson and Coleman/Poteat. Poteat was also the first one in as the nickel. Due to Revis being unsigned, Rashaun Kizer (39) was seeing reps at third team CB and made a pick of a Brad Smith pass to close out the 11 on 11s.

Schlegel on the third team D, and he may have been responsible for keeping guys lined up properly. Also on third team LB were Wadsworth, Costanzo and Trusnik. Spenser looked good in the drills, though I didnâ€™t see him playing on the 11 on 11s today.

They also ran reps practicing the wedge/wedge busting on KOs. Wallace Wright, who has had a nice camp so far, getting kudos from Westhoff.Â  Leon looks very quick returning kicks/punts and Brad Smith is just so fluid, its great to watch him run around and play football. I didnâ€™t see Miller too much on ST today, but he was getting a lot of reps at CB.

They practiced the FG team unit, and after missing his first one, Nuge hit the rest of them from 40 yards out.Â  They also practiced the punt/coverage unit. Graham continues to boom them. In other surprising news, the sun rose in the east today.

After the 11 on 11s, they broke off into groups and I followed the offense, practicing screens to TJ, and WR screens to Coles and Cotchery.

I also watched the DL vs the OL, where the DL was working on their stunts.Â  Adrian Clarke looked good getting out up field on the screens.

The team looks crisp, and even on a very hot day they practiced well.Â  There are actually less questions in camp this year compared to last year, since the starting QB is in place, and the RB situation is more stable.

The D looks much more comfortable with their assignments, and the OL and DL are much improved.

There are the two contract distractions, but on the field, good things are happening. I like the look of this team, and I think they are starting to feel it. Once the two distractions are resolved, I think it will help a lot, but there is pretty good athleticism on the team, a lot of discipline and organization, and they look physically stronger than last year, and have better stamina to get through these difficult practices.

Discuss this and all the breaking Jet News here.