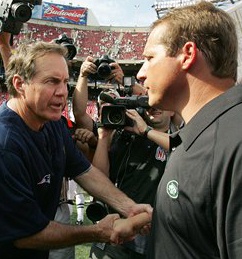 The New England Patriots defeated the Jets today in the season opener by a score of 38 to 14.Â  The story of the day for the Pats was Tom Brady (3 TDs) and Randy Moss (183 yards).

The score was actually tied at 7 with just over a minute before the half.Â  The Pats went ahead on a Brady to Ben Watson TD pass.Â

Then the 2nd half happened.Â  To say the wheels feel off would be an understatement.Â  Trailing 14 to 7 the Jets kicked off to start the half.Â  Nugent’s kick went 8 yards deep in the end zone.Â  So KR Ellis Hobbs ran it back for a TD.Â  Add in a 51 yard Brady to Moss TD and you have yourselves a blow out.

Chad Pennington (12/21, 2 TDs) was hurt in the 3rd quarter (right leg) but returned to lead the Jets down the field and hit Coles for his 2nd TD of the game.Â  Kellen Clemens saw some action as the Jets felt it wasn’t smart to risk further injury to Chad.Â  We will provide updates on Chad’s status as more details become known.

Things the Jets did not do well today include, but are not limited to:Â  Stopping the run, defending the pass (Revis had a very solid game), putting pressure on the QB, running the football, finishing drives, pass blocking and the kickoff return team had a poor game.Â  If we think of more things that the Jets didn’t do well we reserve the right to update this list.

On a good note, the Jets flight crew performed very well.Â  Although if their main source of cardio excercise is running around the field after the Jets score, we fear for their long term health.