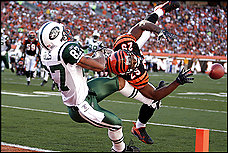 Throughout his tenure as a New York Jet Laveranues Coles has endeared himself to the fans with his toughness, determination and heart. His team first attitude and tough as nails approach was second to none and made him a very integral part of the Gang Green’s offense.

All of this cumulated with Laveranues becoming a team captain prior to the 2007 season. In many aspects there was no better example to be around for the influx of new players the Jets were bringing in during their rebuilding process.  Now in March of 2008 there are reports that Mr. Coles has decided that he is not being compensated fairly by the New York Jets and wants his contract restructured and or extended. And in an effort to prove his point he has decided that he will not attend mini-camps or passing camps, and mentioned a possible training camp holdout as well. Of course this was communicated through the media leaving the Jets in a precarious situation. In response the Jets reportedly offered to guarantee Coles $11 million dollars over the next 2 years, which was unprecedented. This offer was rebuffed as Laveranues felt this compensation did not match what he brings to the team in talent, effort and leadership. Lets keep in mind that Coles received approximately $21 million dollars in signing bonuses over the past 5 years.

Well Laveranues as a long time fan of yours I have to admit I cannot be more disappointed in your actions. Throughout your career as a New York Jet you have been compensated like a valued wide receiver, as well as played in a major market where you could capitalize on marketing opportunities. There can be arguments made that you were the highest paid wide receiver the New York Jets have ever had. But all of this is just not good enough for you. You have earned the respect of your peers in the NFL as well as fans nationwide. In addition you were given the responsibility to being a role model/leader for the young players on the Jets which at first you embraced. Now you are going to give all of this the middle finger because $11 million dollars over the next 2 years is not good enough for you.

Are you kidding me? What exactly are you trying to accomplish here, beg your way off of the Jets? Or maybe all along your true color has really just been green. Regardless LC you are dropping the ball on this one. This franchise has been there for you, maybe once you could be there for them. It is times like this that I miss classy athletes like Curtis Martin and not the members of the “show me the money” group that you are becoming a solid member of. Enjoy your next stop Laveranues.

Parting Shots:
· In keeping with the dropping of the ball theme, the Jets missed an opportunity to get Kerry Rhodes locked up this winter. Now with big deals given to players like Gibril Wilson the bar has been set high to keep Rhodes, which could have been avoided.
· This is clearly the offseason that will make or break this regime with all of this money being spent on free agents. Here is hoping for once the Jets got it right..if not could set them back a while.
· With the signing of Alan Faneca and Tony Richardson the Jets will clearly be trying to establish a strong running game. That will fit in perfect with Chad Pennington’s play action pass and game management. Face it people Chad will be the starter.