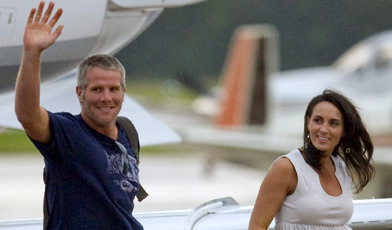 Normally the Jets are slow to release information to the public.  Funny how trading for a Hall Of Fame Quarterback can change that.  Randy Lange stayed up late on Wednesday evening and announced the Brett Favre trade in record time.

Woody Johnson stated that he was excited to welcome Brett and his family to the Jets.  (Loosely translated that means, Brett thank you for coming to the Jets shortly before our PSL announcement).

It has been quite the off-season for the NY Jets.  The franchise is committed to improving this team, they showed that in free agency.  By bringing in a QB of Brett Favre’s caliber, Woody, Mangini and company are determined to retire the phrase, “Same old Jets”.

It will be interesting to see how the Vegas odds react to these moves and how people’s Jets predictions will turn out.

For any Brett Favre fans that want to jump on the Jets bandwagon we want to let you know that there are plenty of seats available.  You can site just about anywhere.  If you want to read up on the Jets recent moves, check out our off-season move tracker.