Lost amongst the excitement of the Jets 24-7 victory over the Houston Texans is the fact that Gang Green continues to have a hard time selling tickets for the 2009 season. The Jets have tried everything from online marketing campaigns, to banner ads on www.newyorkjets.com, to full-page advertisements in the New York Daily News. As of Tuesday morning tickets can still be purchased online for the Jets home opener against the division rival Patriots. Could it be that the Jets will fall subject to the NFL blackout rule (not televised in local market)?

For those of you not familiar with the blackout rule it applies when the game is not sold out 72 hours prior to kickoff.  And what caused this situation to occur? The Jets did not raise their ticket prices in 2009 and continue to spend money to bring in marquee players. Is it the poor economy or the Personal Seat Licensing program the team is rolling out in 2010?  Did the Jets not have a waiting list of over 10,000 “anxious” fans that wanted tickets?

Whatever the case, it will be interesting to see how this situation plays out. I would not be surprised to see the team buy the remainder of the tickets to prevent the embarrassment of a blackout. Those tickets could then be given out to charities and subsequently written off by the organization. Or the Jets may have to start marketing their tickets to their opponent’s fans in order to sell out games. Could you imagine a game where the opponent’s fans make up 10-15% of the crowd? (think Steelers game 2007) As a long-time season ticket holder I cringe at the thought. 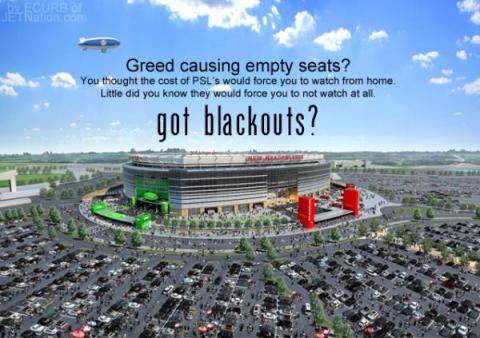