You have probably seen the picture by now.  Rex Ryan was at an MMA event in Miami last weekend and expressed his love for the Dolphins faithful by giving them the middle finger.  No big deal you say?  Cell phone cameras are everywhere and one lucky fan took home a nice picture of it. 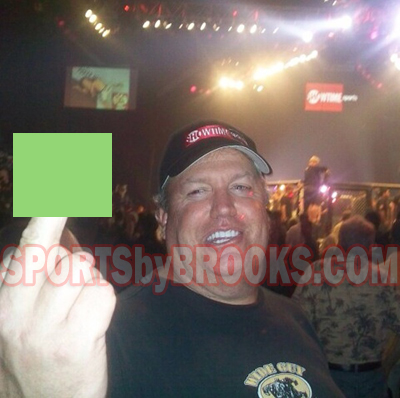 As a result the New York Jets have fined Rex Ryan $50,000.  The league could get involved as well but it is unlikely since the Jets imposed their own fine.

“It was stupid and inappropriate,” Ryan said in a previously released statement. “I wouldn’t accept that type of behavior from one of the coaches or players and it’s unacceptable from me. I apologize to the Jets organization, the National Football League and NFL fans everywhere.”

Mike Tannenbaum:
“Rex showed extremely poor judgment and his conduct was inappropriate. He knows he was wrong, has apologized and we have accepted his apology. Any other actions regarding this incident will be addressed internally by the organization.”

You can discuss this in our New York Jets message board.