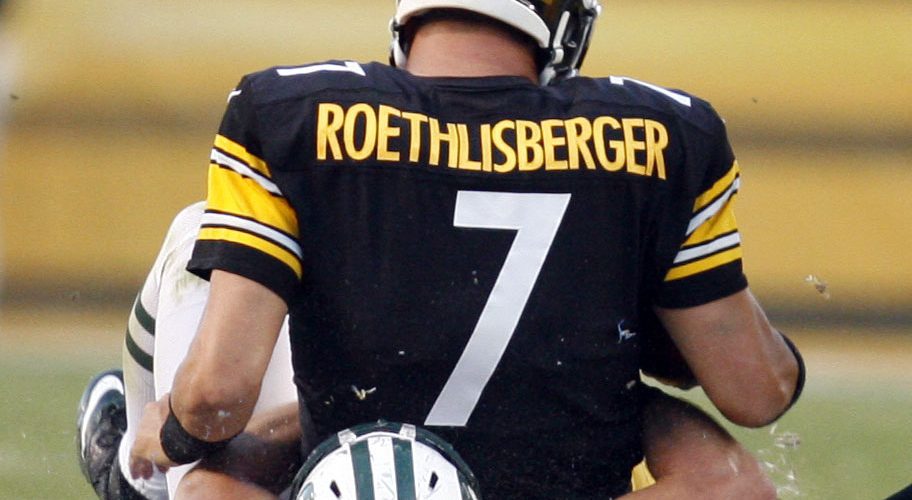 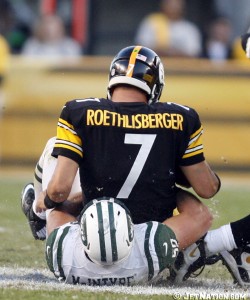 The Jets started the day with a touchdown but never found the end zone again, losing 27-10 to the Pittsburgh Steelers today. If the Jets miss the playoffs by a game, they can point to this one and say, “If we’d played a good game, we’d have won.”

The Steelers were injured. Troy Polamalu and James Harrison didn’t play. The Jets didn’t have Darrelle Revis, Dustin Keller, or Bryan Thomas but if they’d played better, they still could have won.

Nothing seemed to work for the Jets today. The offense, after their hot start, fell apart 2011 style. Mark Sanchez was 10 for 27 for 138 yards with 1 touchdown. He had no interceptions and was sacked twice, although the offensive line performed pretty well.  Sanchez’s numbers aren’t good but they are somewhat deceiving. There were a lot of dropped passes for Jets receivers that ended a lot of drives prematurely. The ball was usually in the right place. NFL receivers have to make those catches. They didn’t get open and ran the wrong routes. They didn’t turn around.

We all knew going into the season that the receiving corps was suspect; it was only Santonio Holmes and a bunch of unproven guys. Unfortunately, Holmes played like a rookie too, with a number of drops and a few only bailed out by flags.

Oh, and the run game entirely disappeared. In fact, on offense, Sanchez was probably the least of the team’s problems. The Jets have come full circle in terms of offensive ineptness.

For a team that was supposed to be fielding an elite defense, the defense looked bad today. Elite defenses don’t miss tackles and don’t let up 27.5 points per game. They were good at stuffing the run, but if the ball went through the air for any reason, the Jets could not make a tackle. They did get pressure on Steelers quarterback Ben Rothelisberger, but then couldn’t take him down. When plays broke down, Roethlisberger still carved the Jets defense up like a Thanksgiving Day turkey.

The Jets missed Darrelle Revis, particularly when Antonio Cromartie decided that the best defense on Mike Wallace was waving his arms around after Wallace caught a 37 yard touchdown pass on 3rd and 16 at the Jet 37, but missing Revis wasn’t the reason the Jets lost.

The defense let the Steelers score on 3 of their first 4 possessions, even if two of those scores were field goals. They weren’t completely solid from the beginning. They weren’t good on third down, and as the game wore on and they got more tired, it got worse. Garrett McIntyre did well today, and Sione Pouha doesn’t look like his injury is lingering. Beyond that, it was a bad day for the defense. It was even a hard day for LaRon Landry, who committed two costly penalties for 28 yards.

To top it all off, Jeremy Kerley, so good last week, ran the wrong routes this week and muffed a punt in the second half that the Steelers recovered, after the defense made a great stand at the Steelers end of the field.

Some of the play calling was suspect. The Jets were entirely too conservative on both sides of the ball from the middle of the first quarter forward. When the Steelers scored the touchdown at the end of the first half, the Jets got the ball back with two timeouts and a minute to go. They had decent field position. Rather than go for points, the Jets ran out the clock, playing “not to lose.” The Jets do that quite frequently, and it’s annoying all the time. You’re playing the Steelers. Every minute counts, points matter, even if it’s just a field goal at the end of the half.

The Wild Cat was used with some success in the second half. Why did they use the same play three times, and when it failed, stopped using it entirely? Holmes was thrown more and more balls as the game went by; they almost entirely stopped targeting other receivers. Why? Holmes was not hanging on. Stephen Hill had a drop, but they hardly threw back to him again.

Finally, the officiating in this game was terrible. It’s not an excuse for losing, but it was really bad, whether it was the phantom penalties, the missed calls, or the terrible spots. If only there were referees out there with years and years of NFL experience who could do this kind of thing. Oh wait…

Still, the Jets just did not play a good game.

Nobody expected a repeat of last week, but we expected a bit better than this. The Jets don’t have a track record of success in Pittsburgh, but today they missed a great opportunity against a banged up Steeler team.  Rex Ryan should be chewing out his team in the locker room and in practice this week. It was a sloppy game.

The only bright side is the Patriots are also kicking themselves today for missing a great opportunity; they lost to the Cardinals, 20-18 at home. Yes, seriously. The entire AFC East is 1-1 after two games, and the Jets are actually in first place due to a 1-0 division record. Enjoy it while it lasts, Jets fans. If this keeps up, the Jets won’t be there long.

Next week the Jets visit the Miami Dolphins in a game they must win. They can’t be 1-2 going into games against San Francisco and Houston and dropping a division game to Miami doesn’t help playoff hopes. Kickoff is at 1:00.

By Kristine Gammer
Posted on September 17, 2012