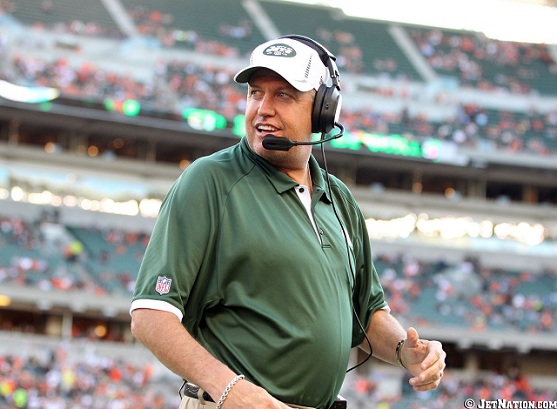 In the aftermath of a disappointing 23-17 loss to the Houston Texans, a game the Jets showed infinitely more heart than they did a week earlier, I want to attempt to point out some positives we as fans can draw.  The Jets sit at 2-3 but are certainly in no way playing for draft position just yet. Their three losses are to teams with a combined record of 11-3.  The Texans and 49ers are arguably the two best teams in their respective conferences, and I am sure the Steelers will be competing for a playoff spot deep into the season.  I absolutely am not trying to take us back to the days of Bruce Coslet where every loss seemed to bring  new creative ways to extract some optimism. However, in a league where parody is king, the AFC has two division leaders with some separation from the pack, and the rest are right in the thick of things.  Of course none of this changes what is happening on the field for the New York Jets and if they can’t find a way to generate some legitimate offense soon, the scouts will be the most important people on their payroll.

Why is it not a single NFL quarterback or coach has figured out that in some situations a timeout is more valuable than saving five yards?  There is nothing I hate more than the use of timeouts for something other than clock management, and Rex Ryan seems to be making it a rampant problem.  In what was essentially the Jets final drive, Sanchez was sacked with 2:15 remaining creating a crucial 3rd down and 18 yards to go.  Because the Jets had just one timeout left, they were forced to rush to the line and get the snap off before the two minute warning, leading to the game ending interception.  I suspect, had they had a full complement of timeouts, they could have taken their time, regrouped and used the 2 minute warning timeout to make sure they had the play they wanted.  Why were they out of timeouts?  They used both on 1st and 10 situations.  The first was taken early in the 4th quarter trying unsuccessfully to get a package in for Tim Tebow.  The drive did lead to a field goal, but they were in field goal range before the timeout.  The second was used with 7:42 remaining as the result of similar substitution confusion.  Three plays and a sack later the Jets were punting.  In addition to the aforementioned sideline debacles, the Jets were also called for 12 men on the field on defense with 6:29 left in the contest.  What made that even more frustrating was it came immediately following a change of possession television timeout.  How on earth does that occur Rex?

The New York Jets defense was able to come up with some critical stops, especially in the second half.  The unfortunate part of that story is it was veterans like Antonio Cromartie,  David Harris, Bryan Thomas and a few others leading that charge, while young, high draft picks continue to be non-factors.  Third rounder Kenrick Ellis was able to manage four tackles, but first round picks Quinton Coples and Muhammad Wilkerson combined for one tackle.  Coples, a complete no show, had a great push in the backfield on one play, but penetrated too deep and the running back scampered past him.  It is very concerning to me that a defensive lineman lacks either the discipline or the know-how to level off, find the ball and move laterally to make the tackle.  In that moment, I wondered if the lack of production on this young defensive line is as much about coaching as talent.

Rex is seemingly reminiscent of the often replayed Herm Edwards’ “you play to win the game” quote, that in my opinion, in no way reflected his scared, coach not to lose philosophy.  When asked if he felt his job was in jeopardy, Rex proclaimed  “I know I can coach”.  But the reality is he and his staff have 11 more games to prove it.  Confidence and previous season’s aside, he is on the worst run of his head coaching career.  After admitting to losing the pulse of his team last year, he needs to find a way to get this year’s team on a winning track. Woody Johnson seems not to be an unreasonable man, and he is smart enough to know the playoffs may not be a realistic goal.  But  a five or six win season will more than likely land Ryan on the sidelines somewhere as a defensive  coordinator in 2013.  With the much improved Indianapolis Colts coming to town, this could be a first huge step in showing New York and his boss he is capable of being a head man in the NFL.