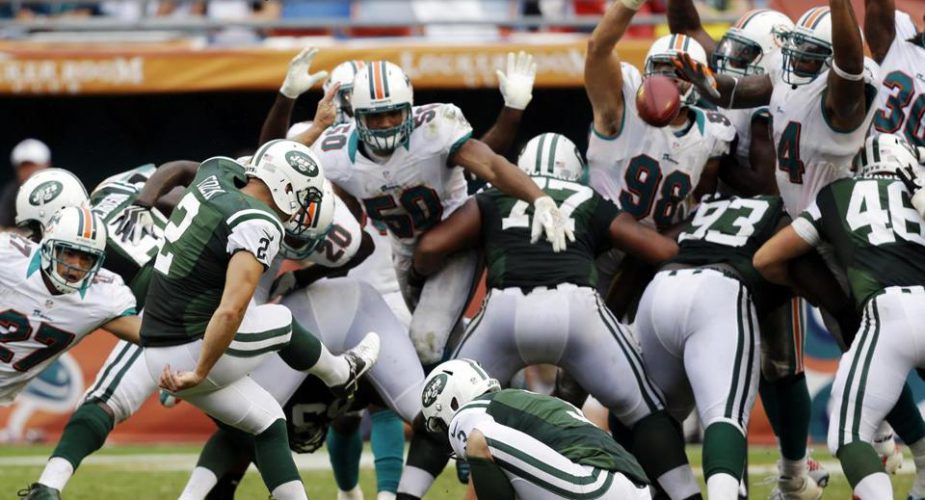 The Jets escaped Miami on September 23, with an overtime nail biter win 23-20. Miami had a few opportunities including a missed field goal in overtime that sealed their fate. In that game the Jets rushed for only 93 yards while the Dolphins ran for 185…and Reggie Bush got hurt. Sanchez threw for 296 yards, while rookie Ryan Tannehill threw for 196. The defense forced 2 turnovers and the offense gave two turnovers back via Sanchez interceptions.

Bottom line is the Jets won the game, and since then, with the exception of the San Francisco game, have gotten better and better as a team. The defense has really tightened up against the run, the defensive backs are playing great, and the offense is learning how to live without Santonio Holmes and have developed a run game. It took a little more than just the preseason to get used to this offense and the players are falling into their roles nicely. This weeks matchup will be an old school battle between two division rivals that will be very fun to watch.

Ryan Tannehill has been everything the Dolphins could’ve wanted in a franchise quarterback. His touchdowns-to-interception ratio isn’t what they want (4-6), but he’s completing 60% of his passes. The biggest concern the Dolphins have is their offensive line. Tannehill has been sacked 12 times this season, and with the Jets defensive line beginning to gel as a unit, this number can increase this Sunday.

Reggie Bush got hurt in the first meeting, but before that he rushed for 61 yards, averaging over 6 yards per carry. Rookie Lamar Miller and Daniel Thomas took over and gained 117 yards combined on 28 carries. Those three will all be playing this week, as well as, fullback Javorskie Lane who is used in short yardage downs and on the goal line (two touchdowns, including one in the previous meeting in September).

Since the last meeting, the Dolphins have released Legedu Naanee. Their receiving core consists of Brian Hartline (29 catches, 514 yards), Davone Bess (28 catches, 388 yards), deep threat Marlon Moore (3 catches, 46 yards and a touchdown) and tight end Anthony Fasano (17 catches, 176 yards). Not to mention Reggie Bush who has 140 yards receiving. He’s a major threat to the Jets defense out of the backfield, especially if Calvin Pace, Bart Scott, or Bryan Thomas have to cover him. Rex wouldn’t put his defense in that position, but sometimes the play call dictates the coverage. With the Jets defense clicking and playing in front of their home fans before a bye week, the Dolphins may struggle this Sunday.

The Dolphin defense is led by Karlos Dansby, who is on pace to have 100+ tackles again this season. The rest of their linebacking core includes Kevin Burnett (36 tackles) and Koa Misi (34 tackles), both who are great run stoppers but below average cover guys. Dustin Keller (who didn’t play in the first meeting) poses the biggest threat over the middle against these linebackers.

Their front line is led by Cameron Wake who has 6.5 sacks this year. The rest of the line consists of Randy Starks, 16 tackles and 3.5 sacks, Jared Odrick, 12 tackles and 2 sacks, and Paul Soliai. This front line along with Olivier Vernon combined for 2 sacks of Sanchez back in September. They also held the Jets to only 93 yards rushing, but with the Jet offensive line gelling as a unit the past two weeks, they should expect to exceed that number on Sunday.

Their secondary, with the exception of Reshad Jones and Sean Smith has been anything but spectacular. Jones and Smith have 4 of the total 7 interceptions the team has. This weekend, Smith will probably be in charge of covering Jeremy Kerley who is emerging as the Jets #1 receiver without Santonio. That leaves Chris Clemons, and Richard Marshall as the targets for the Jets to attack on Sunday.

Brandon Fields is averaging 51 yards per punt, while Dan Carpenter is 7-11, having missed all 4 from 40 yards or further (including 2 against the Jets).

Marcus Thigpen and Davone Bess share the punt returning duties. Thigpen has scored a touchdown returning a punt 72 yards this season. Thigpen is also their kick returner. On kick returns he’s averaging 27 yards per return. With the Jets being exposed last week by the Patriots’ Devin McCourty, they better fix their mistakes because Thigpen can be an “X-Factor” and a game changer.

Do you need Jets Tickets?