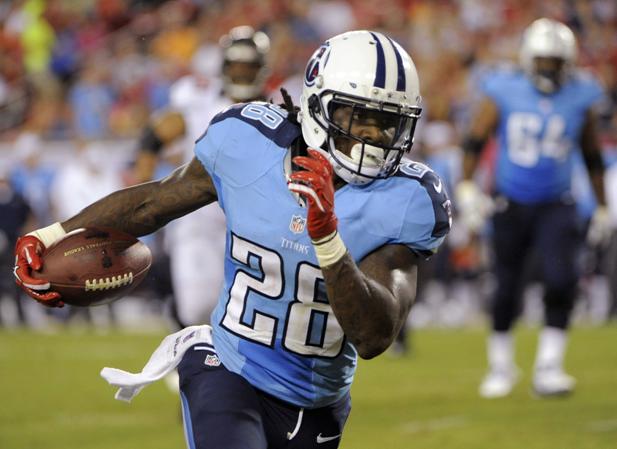 Below are a few players from the Tennessee Titans that can have a major impact on Monday night’s game against the Jets. For the full game preview, see New York Jets at Tennessee Titans Game Preview.

1.  #28 RB Chris Johnson–  After a subpar year last season, Chris Johnson is back to being one of the most explosive, game-changing backs in the league.  He’s rushed for 1,037 yards on 223 attempts for an average of nearly 5 yards per carry. With Bryan Thomas out with a pectoral injury, the Jets defense could have a severe setback in stopping the Titans run game. Last year after, Thomas got hurt the Jets rush defense was 13th in the NFL, a significant decline from 2010 where they were 3rd overall. Johnson is extremely fast and can hurt opponents both in the run game and passing game. The Titans use him to run screens, as well as, send him out of the backfield for 3rd down reception. He has 33 receptions on the year, so he is the most dangerous back the Jets have seen since Steven Jackson in Week 11.

2. #13 WR Kendall Wright and #85 WR Nate Washington– Kenny Britt is the number one targeted receiver(although he doesn’t have the most receptions) for the Titans so he will likely be covered by Antonio Cromartie on Monday Night. With TE Jared Cook and WR Damian Williams both out Monday, the two players that will pose the biggest threat this week are Wright and Washington. Kyle Wilson has struggled yet again in the 2012 campaign. He will be responsible for covering one of these two receivers, while the safeties and Ellis Lankster will be covering the other. They are both big play speedy receivers that can change the game with one deep pass. They have combined for 98 receptions for 1,203 yards. That’s an average of 12.3 yards per catch. The Jets will have to be creative in covering these receivers or get a ton of pressure on QB Jake Locker to ensure that these two big play receivers aren’t able to change the game.

3. #56 LB Akeem Ayers– Ayers is the strong side linebacker for the Titans. He leads the team with 84 tackles. He has 4 sacks, 1 interception and 8 pass deflections. With the consistent issue of batted balls against Mark Sanchez, the pass deflections number can go up tomorrow night. Ayers is athletic enough to cover and fast and strong enough to create a formidable pass rush. The Jets and Mark Sanchez will need to be aware of where he is on all plays, especially since MLB Colin McCarthy is out tomorrow. Ayers will have a bigger role in the defense and could impact the game if the Jets allow him to.