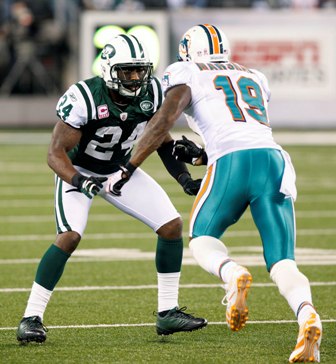 The Darrelle Revis saga continues as stories are coming out of the NFL combine in Indianapolis about friction between himself and Jets executives, along with more trade rumors.

The New York Daily News reports that Jets general manager John Idzik met with a number of player’s agents but not Revis’:

Idzik … met with representatives of Santonio Holmes, Dustin Keller, Jeff Cumberland, Austin Howard, Shonn Greene and LaRon Landry during the week, but elected not to talk to Revis’ agents.

Revis’ contract runs through this season but the Jets are prohibited from restricting (tagging) him in any way after the contract runs out.  With Revis able to become an unrestricted free agent next year the cash strapped Jets may not be able to retain him.

News came out about the Jets, at the behest of owner Woody Johnson, looking at possibly trading the star cornerback instead of signing him to a new contract or losing him to free agency.  Revis recently lashed out at the organization during an interview about not being informed the team was looking to trade him.

Jason Cole of Yahoo Sports reports that the Jets have listened to “preliminary offers” for Revis while at the combine:

As the Jets spent last weekend at the NFL scouting combine shopping Revis in passive-aggressive style (New York isn’t calling anybody, but team management was all ears when multiple teams called to hold preliminary talks, according to sources)

Revis is rehabilitating from a torn anterior cruciate ligament (ACL) in his left knee sustained early last season but it looks like the Revis trade talk will only grow louder and stronger as his recovery progresses.