Could Jets Standing Up To Revis Lead To Long Term Deal 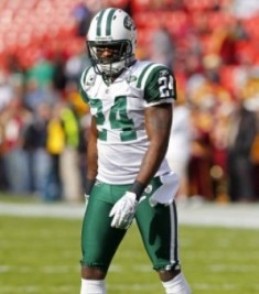 You can’t look at a newspaper or go on the internet without seeing some report about the New York Jets, led by owner Woody Johnson, “determined” to trade star cornerback Darrelle Revis.

Revis himself has done interviews talking about trade rumors “hitting home” and how the Jets didn’t even contact “their best player” about potentially trading him.

A prevailing theme is Woody Johnson simply does not want to “pay the man” while opinions vary on Johnson he’s definitely not cheap.  In fact the Jets usually spend most of the payroll allowed under the salary cap rules and this year will be no exception.  The team has also doled out many big dollar contracts, some were the highest in NFL history (David Harris, Alan Faneca), much to the detriment of the team’s current finances.

It was unclear whether John Idzik was informed about Johnson’s desire to look at trade possibilities for Revis before he was introduced Jets new general manager as the Revis trade rumor news broke a day before his official introduction.  However one thing is clear Idzik, Johnson and the Jets as a whole are showing they’re ready to move on without Darrelle Revis in green and white.

Many Jets supporters feel trading Revis is lunacy and how could they trade away their best player?  The thing these fans might be missing is by sending Revis a message that no one player is bigger than the team and they’re willing to move on puts the Jets in a position of strength, which might just lead to Revis resigning with the them.

Revis has held-out twice in his short career once before his rookie season in 2007 and again in 2010 eventually receiving a new 4 year deal which ends after the 2013 season.  Revis has been paid $55 million during his six year career with the Jets.

There is $9 million in paid bonus money for Darrelle Revis which counts $3 million under the 2014, 2015 and 2016 salary caps, so that money needs to be accounted for when negotiating a deal, it doesn’t just disappear if he signs a new contract.  Basically the Jets are at a disadvantage since they don’t start from a clean slate (zero) during contract talks with Revis.

By exploring Revis trade offers interested teams are setting a pseudo-market before he potentially hits free agency next year.  Most teams would like a sign and trade deal but are hesitant to make a huge financial commitment and give up valuable draft resources while Revis has not fully recovered from his injury.  Revis will get some idea, even though the injury right now deflates his value, at the kind of offers he might expect if he hits free agency in 2014.

The Jets will also know the kind of contract which Revis might except given his current situation.  Revis’ biggest concern is his financial security if he got injured again in 2013 as it would damage his value heading into free agency next offseason.  This is leverage the Jets could use to facilitate a new deal even with tight finances the team could pay Revis more this season while committing to him long term but he would have to except certain concessions to make the deal work for both sides.

So Idzik needs to offer a fair long term contract structure which takes all factors into account and protects both team as well as player.  Revis is a great player and if he can return from his knee injury deserves a big contract but like with any contract the team must have a budget and evaluate the risk factors involved with terms of an agreement.

So the “just pay the man” phrase is easy to say but putting an offer on paper which allows for player compensation while not stifling the teams ability to put a viable product on the field given resources are limited by a salary cap is much more difficult.

Revis has stated he wants to remain a “Jet for life” but John Idzik will negotiate from a position of strength.  He will let Revis know while the Jets want him they won’t be pushed around and will find alternatives if a fair deal can’t be obtained.  This strategy could ultimately lead to Revis getting the “retirement contract” with the Jets we all desire.