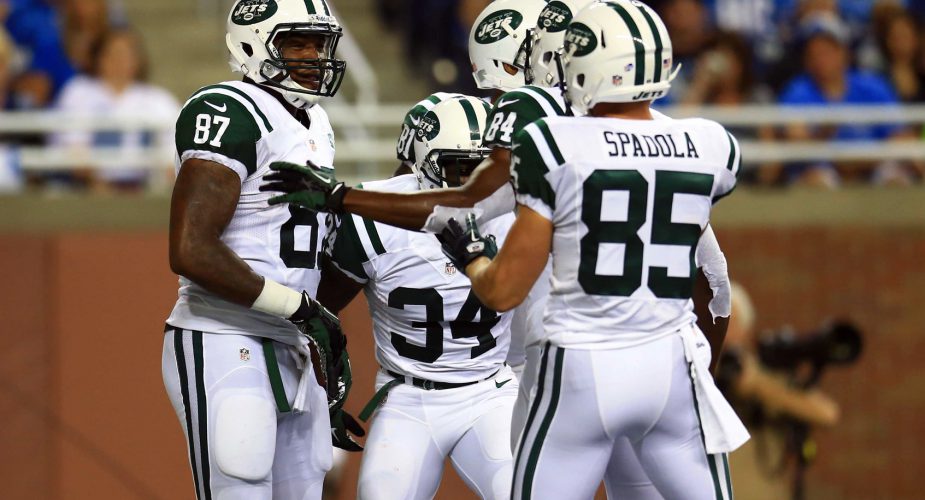 The Jets dropped their preseason opener to the Detroit Lions by a score of 26 – 17.  It is the preseason so we will hold off on a full break down of the game.  But here is some reaction and injury updates.  Let’s start with the injuries.

Geno Smith was injured but told the media after the game that his ankle injury isn’t serious.  He wants to practice on Sunday.

The Jets are thin at running back and that situation got worse with an injury to John Griffin.

Chris Ivory says he will practice this week and wants to play on Saturday against the Jaguars.  The Jets need Ivory back on the field now that Griffin is hurt.  Add in the head injury for Joe McKnight and the uncertain status of Mike Goodson and running back is an even bigger concern.  Ivory, Powell and Chad Spann all have big opportunities to stand out in front of them.

LB Garrett McIntrye and T Dennis Landolt were both injured in the game.

Mark Sanchez did the unthinkable.  He threw another pick-6 to a defensive lineman.  Simply put, that is the one thing that Jets can not have happen.  Yet it keeps happening with Sanchez.  Mark did bounce back and ended the day 10/13 with a TD and 125 yards passing.

Geno Smith was 6/7 with 47 yards passing.  He looked like a rookie at times and Marty Morhinweg seemed to keep it very simple for him which you would expect in his first game.  The ankle injury is worth watching, any missed practice time will really hurt Smith’s chances of grabbing the starting job in week one.

When you add in Greg McElroy, the Jets QBs were 27/39 on the night with 292 yards passing.

Unscientific Thoughts (In No Particular Order)

1.  The wide receivers were actually open.  That is worth mentioning because that hasn’t been the case for the Jets in recent years.  Clyde Gates looked explosive with 3 catches for 39 yards in limited action.

2.  The Running Game was nowhere to be found.  This actually could be a bigger cause for concern than the QB situation.  Yes, that is a scary thought but the running game did not exist in this game.  The Jets are working in two new guards but when your line reads 16 carries for 37 yards you know you have a lot of work to do.

3.  One positive for the offensive line is they are feisty.  There was a lot of pushing and shoving after the play was over.  A lot of that is because the players are cranky in camp.  But it does set a nice tone.

4.  Penalties:  This will be a big focus for Rex and company this week, there were too many penalties in this game.  Most of which were mental errors (offside \ false start).  You can be sure that the players will hear a lot about the 11 \ 85 line. (11 penalties for 85 yards).

5.  Dee Milliner played like a rookie, he had an excellent play where he knocked down a pass in the end zone but later he had a missed tackle that led to a first down.  There was more good than bad with Milliner though.

6.  The Defense:  Quinton Coples had a sack and the first team defense looked good.  Antwan Barnes is going to help the pass rush but he had two penalties in this game (offsides).

That is it Jets fans, a very unscientific recap of the first game.  Remember, it is the preseason so there is no need to panic over a loss.  Keep an eye on the injury situation and we will see how much progress they have made when they take the field on Saturday at home against the Jaguars.

7.  Tight End Improvement?  Jets QBs threw to tight ends 3 times, and each pass was completed.  Kellen Winslow, if healthy, is an immense upgrade over Dustin Keller.  And the slimmed down Jeff Cumberland caught a 26 yard touchdown pass from Mark Sanchez.