The New York Jets have announced that they have released Hayden Smith.

We had the opportunity to talk to Hayden Smith when he first signed with the Jets.  The ex Rugby star was learning football and was signed to the Jets practice squad after camp last year.  He was eventually signed to the active roster and caught one pass for 12 yards last season.  Tight End Jeff Cumberland has had an excellent camp and Kellen Winslow Jr has looked good as well.  That certainly factored into the release of Hayden Smith.

You can discuss this move and read more about about Hayden Smith on our message board. 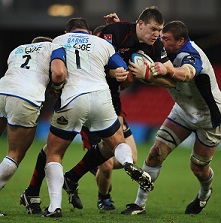