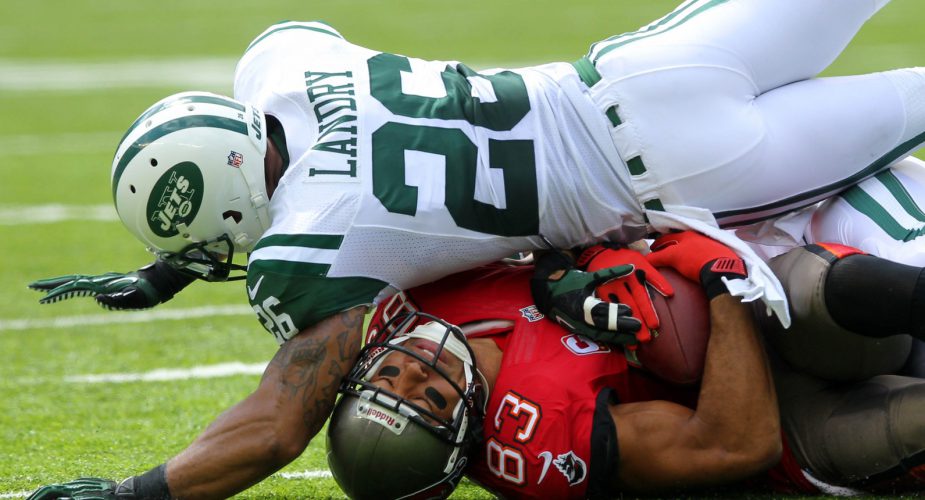 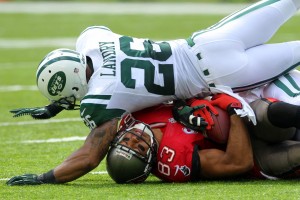 The Geno Smith era as starting quarterback of the New York Jets has officially begun, as the Jets won their opener at home against the Tampa Bay Buccaneers, 18-17, on a wild finish.

Smith completed his first pass, but after that the offense slowed down significantly. They ran a lot more wildcat than anyone really wanted to see, but Smith’s final numbers were respectable for a rookie in his first NFL game. He finished 24 for 38 with 256 yards, 1 touchdown, 1 interception, 1 fumble, and an 80.6 rating.

The first two quarters were rough, though. Smith fumbled the ball just outside the Jets endzone and threw a bad interception – over the middle and high, too high for running back Chris Ivory to catch. But Smith pulled it together a bit and, fighting the clock at the end of the first half, threw two great passes to tight end Kellen Winslow Jr., one of which was Smith’s first NFL touchdown. The Bucs, who had the number one rushing defense last season, held the Jets running game to very few yards.

The defense got off to a strong start, helping to draw penalties on the Bucs offense, which struggled to even get a play off at times, and had a safety. Linebacker Antwan Barnes and defensive lineman Mo Wilkerson both had enormous sacks, and the only part of the team that isn’t considered by experts as a complete joke – the defensive line – held the Bucs running game in check.

This didn’t stop Tampa from exploiting the weak spot in the Jets defense: rookie corner back Dee Miliner gave up some big plays, including a touchdown. Tampa Bay quarterback Josh Freeman and wide receiver Vincent Jackson even managed to make Antonio Cromartie look bad a couple of times.

The offense’s early struggles and three and outs appeared to be tiring the defense out at the end of the half, but they held fairly well, and the score was 14-12 Tampa at the half.

During the second half, the Jets offense looked more put together, and Smith looked better, but there was even less scoring. The Jets scored just two field goals, the Bucs had one. The Jets offense, which took the lead late in the fourth on their first field goal of the half, failed to convert on a crucial third down that allowed Tampa to get the ball back with about a minute left.

The defense, so solid all day, then let up a number of big plays that put the Bucs in field goal position, and left the Jets down by two points with only about 30 seconds left.

It was all but over until the Bucs, who were completely undisciplined all day, pushed Smith, already at the sideline, out of bounds. The 15 yard penalty put the Jets in field goal range with nine seconds left, and Nick Folk put the ball between the goalposts.

With two seconds left, the Jets nearly let the Bucs throw the ball all over the place all the way to their endzone on the kickoff, but hung on to win the stunner.

The other big storyline of the game, besides Geno Smith’s professional debut, was former Jets cornerback Darrelle Revis returning to MetLife stadium as a member of the Bucs. Revis’s knee held out, and he played well, but had no interceptions of the rookie quarterback, which was widely assumed to be all but guaranteed. Jets fans are probably relieved that the “Revis returns” narrative is over.

+ For the first time in years, the Jets had a pass rush. It was effective, and in addition to the Wilkerson and Barnes sacks, Calvin Pace and rookie Sheldon Richardson also had a half sack each. It might be early, but the defensive line made a statement today.

+ Safety Dawan Landry had a big interception for the Jets, but also managed to miss a tackle on Tampa’s last drive that gave the Bucs an extra 25 yards and field goal position.

+ Geno Smith looked much better today than he did against the Giants during the third preseason game. He’s always been mobile, and he used his mobility for a number of big gains today. He seems to be a very smart runner.

+ Stephen Hill held on to the ball a number of times today, including one ball that was practically on the turf, which is very reassuring. One of his biggest weaknesses last season was butterfingers.

+ Cramps were an issue today, and there were some close calls with injuries. Jeremy Kerley and Jeff Cumberland were tested for concussions on hits from Bucs safety Dashon Goldson. Both returned. Stephen Hill also went to the sideline grimacing after a hit from Goldson. Nick Mangold went to the locker room briefly after being hit in the elbow by his own man.

The Jets next game is this Thursday against division rival New England Patriots. Kickoff is at 8:25 in Foxborough.

By Kristine Gammer
Posted on September 8, 2013