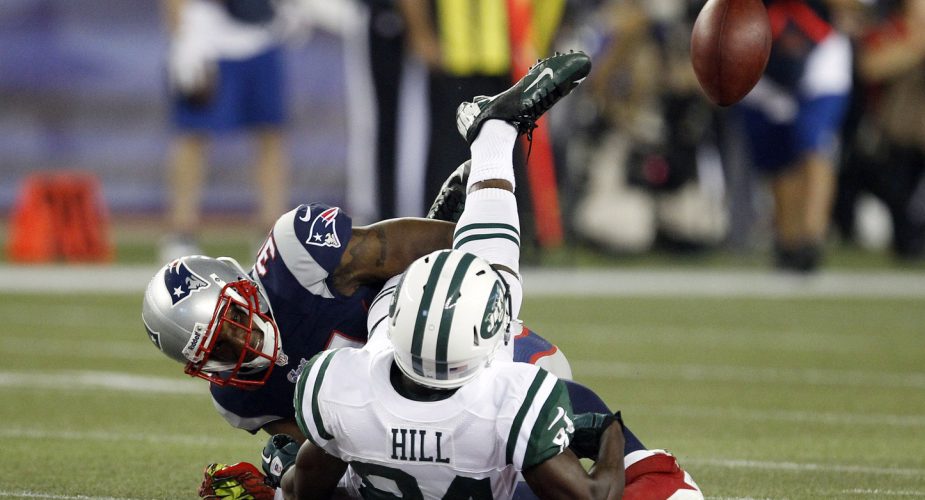 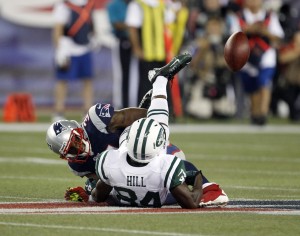 The final score was 13-10 Patriots, but the Jets may have lost more than an ugly one in New England this week.

The game went from frustrating loss to full blown disaster when star defensive lineman Mo Wilkerson went down late in the fourth quarter with what looked like an ankle injury. There were conflicting reports as to whether he limped into the locker room or rode the cart.

The first half was hideous football, but the Jets hung in there, because the Patriots, even with Tom Brady, were just as bad.

The good news for the Jets offense:  Chris Ivory and Bilal Powell moved the ball on the ground this week. Geno Smith made some rookie mistakes, but looked okay. The bad news for the Jets offense: everyone else looked incompetent. The offensive line had flashes of brilliance but also holes, and the wide receivers were a joke. With Jeremy Kerley out, only Santonio Holmes looked like a legitimate wide receiver.

Stephen Hill fumbled the football on what would have been a thirty yard gain. Clyde Gates revealed to the nation that he is, in fact, Clyde Gates, dropping a perfectly thrown long ball from Smith that hit him in the chest and between the hands. Gates also had a touchdown overturned (possibly because the refs have access to cameras that can see through solid objects). The wide receivers were just atrocious.

Not surprisingly, the defense kept the Jets in the game. Except for the first drive, they held the Patriots out of the endzone, and Dee Milliner helped force a fumble. The Patriots had two trips inside the redzone and had no touchdowns. Holding the Patriots to field goals, and a missed Patriots field goal at the half, kept the score 13-3 Patriots.

The second half was more of the same. Solid defense, sloppy offense with more drops than anyone could count. The rain didn’t help the cause, and Smith started throwing interceptions in the fourth. He threw one in field goal range, one with just under 4:30 left, and one with 0:38 left to seal the win over the Patriots.

The last interception set off  a scrum as New England cornerback Aqib Talib danced off the field a little bit slower than Nick Mangold’s flying projectile body. The penalty on Mangold was understandable but an accident – he had already left his feet before Talib got out of bounds – but the Patriots took exception and came on to the field (which was ignored). The Jets then crowded in, and the Jets got penalized. D’Brickashaw Ferguson threw a punch and got ejected – you don’t usually see Brick lose his cool – and Willie Colon also was ejected.  The Patriots weren’t penalized in any way.

As Rex said in his post-game, “Obviously only our team was involved.”

Smith’s final line on the night was 15 for 35 for 214 yards and three interceptions – all in the fourth quarter. Chris Ivory had 12 carries for 52 yards, Bilal Powell had 13 carries for 48 yards and a touchdown. Fun fact, the Jets also managed to dominate the time of possession 34 minutes to the Patriots 26 minutes and still lose.

The play calling in this game was questionable. Ivory was pushing his way through Patriots left and right, but they went away from him late in the first half and in the second half.  With Kerley out, the Jets are returning punts with Kyle Wilson, or…nobody. Multiple times this game, the Jets didn’t send anyone back to receive the punt in an effort to block the rookie punter. It just ended with the Jets losing yards.

Rex didn’t elaborate on Wilkerson’s injury in his press conference except to say he thought it was ankle, hopefully not a high ankle, but that he didn’t really know.

This game, on a short week, was awful to watch. Unfortunately, this was probably the Jets only chance to beat New England this year, with most of their big players injured and Tom Brady’s head close to exploding over his horrendous receivers.

The Jets next game is September 22 at home against division rival Buffalo Bills. Kickoff is at 4:25 on CBS. Hopefully by then, the Jets will have picked up some guys – Braylon Edwards, Brandon Lloyd, literally anyone – who can catch the ball.

By Kristine Gammer
Posted on September 13, 2013