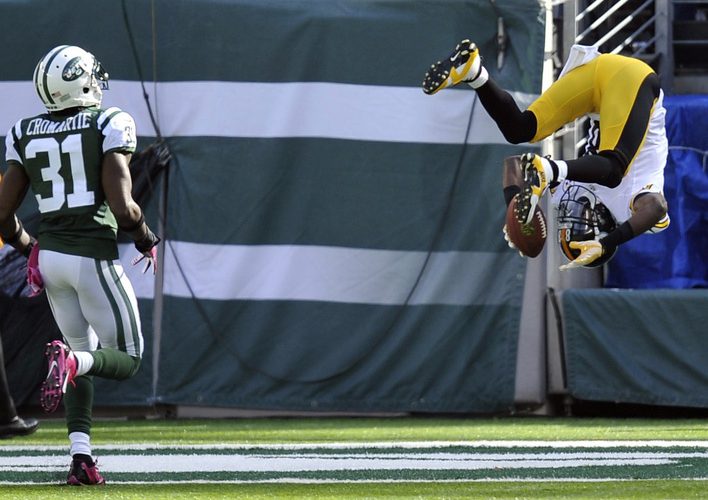 The Jets’ streak of being pathetic against the Pittsburgh Steelers continued today, as the Jets lost 19-6 and fell to 3-3 on the season.

It’s hard to get on the defense for giving up 19 points against a competent Steelers’ offense and Ben Roethlisberger, but it’s becoming clearer that Antonio Cromartie is not playing up to the level he was last season. Either he’s just not having another career year, or he’s not healthy, because he’s lost a couple of steps.

The offense today couldn’t get anything going, and the game was more annoying and frustrating than flat out terrible. The only two times they got near the end zone in the second half, Geno Smith threw picks, once when he targeted Konrad Reuland on 1st and 10 in double coverage with safety help, and then again when he was hit on his release.

The offensive playcalling was a mystery today. They didn’t let Smith get comfortable in the offense, not throwing once in the first five plays, and they were very conservative through the first half, and never got into a rhythm in the second. Why were they targeting Konrad Reuland rather than Jeff Cumberland? Why didn’t the Jets target any of their wide receivers early on? It was puzzling.

Smith was off target all day, missing his receivers all over, and this is definitely part of his being a rookie quarterback, his timing just isn’t entirely down yet. Smith was 19 for 34 for 201 yards with the two very costly interceptions and a 48.8 quarterback rating on the afternoon.

The only highlight of the day for the Jets was that Nick Folk is still perfect on the season. It’s also time that the Jets start looking to bring in another receiver. Clyde Gates was the number one receiver today. Jeremy Kerley is great in the slot and Stephen Hill is coming along, but with Santonio Holmes out until who knows when, they need someone who can catch less than perfectly-thrown balls and make big plays with yards after the catch.

The Jets were also hit by the injury bug today. Kyle Wilson left with a head injury. Clyde Gates injured his shoulder putting his arm out trying to grab a hard Geno Smith pass. Bilal Powell went to the locker room in the fourth quarter with a shoulder injury, and Mike Goodson limped off with a knee injury towards the end of the game too.

The Jets historically have performed poorly against the Steelers, and this game was no different. Steelers’ defensive coordinator Dick LeBeau eats rookie quarterbacks for breakfast, and the Steelers were coming off a bye week, and the Jets were on a short week.

A lot of people are very upset about this game, and it is a very frustrating loss, but the Steelers aren’t as bad a team as their record would indicate (now 1-4) and their offensive line especially upped their play. That especially killed the Jets – if the defensive line can’t pressure the quarterback, the weaknesses in the Jets secondary are exposed. Dee Milliner, especially, needs to get healthy.

It’s still unclear what this Jets team is. The game, while frustrating, isn’t season ending. The schedule for their next three weeks is Patriots, Bengals, Saints. The Jets nearly beat the Patriots in Week 02, and Rob Gronkowski still hasn’t returned. The Saints game is probably a loss, and the Bengals will be tough but are beatable.

The Jets face New England at MetLife Stadium next week. Kickoff is at 1:00 PM.