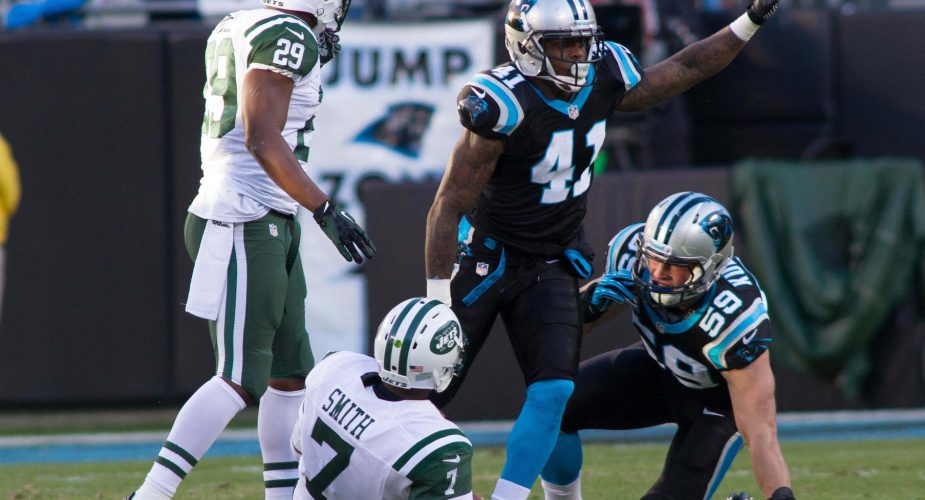 The Jets hung around and made it a ball game, but ultimately lost to the Carolina Panthers 30-20, and fell to 6-8 on the year.

It was an interesting game for most of it. The Panthers and Jets were tied 6-6 in the second quarter, but the Panthers went ahead on a long touchdown run by DeAngelo Willams when David Harris, Ed Reed, and Dee Milliner all failed to tackle him. The Jets were behind the rest of the game.

The offense had a competent day where it looked like maybe everyone on the team was interested in playing football professionally. They had a couple of good drives where Geno Smith made some good throws and decisions, and the receivers made good catches. Jeff Cumberland led the team with 50 yards on three catches, with one going for a touchdown. Santonio Holmes, after mouthing off earlier this week about the Panthers’ secondary being their weakest link, didn’t have a reception until the fourth quarter, and ended the game with two for only 14 yards.

Smith’s final line on the day way 15 of 28 for 167 yards with one touchdown, one interception (a pick 6) and a quarterback rating of 68.6. Not great numbers, but still better than earlier this season. The numbers are down from last week, but the Carolina defense is better than Oakland’s.

Still, the most interesting part of the day on offense came when defensive lineman Sheldon Richardson was put into the game with the Jets on the Carolina goal line. After not getting in the first time, Richardson would not be denied, running into the pile again. It was called a touchdown on the field, but it was hard to see exactly what happened, especially when a Carolina defensive player came out with the ball.

The replay showed Richardson not getting into the endzone, but getting his arm in, with the ball firmly in his possession.

The defense played fairly well today, although the score doesn’t reflect it. The Jets defense allowed 16 Carolina points today. Seven came off Smith’s interception, and seven came off a blocked punt deep in Jets territory. It was the most pathetic special teams display all season, as a Panther came right up the middle. You see guys get a hand on the ball sometimes, but in this case the Jason Williams got his entire body in front of the ball. The Jets recovered the ball but the Panthers took over on the New York 14 yard line. Technically the defense allowed those points too, but they really had no chance. That was the dagger that really put the game out of reach for the Jets.

Overall, though, this wasn’t the most poorly played game Jets fans have seen this year. Carolina is much more talented, particularly on offense, and New York put together a game where they at least looked like they belonged in the NFL.

With this loss, the Jets are a Baltimore Ravens win away from being eliminated from playoff contention. Baltimore plays Detroit on Monday night.

Next week, the Jets take on the Browns at MetLife Stadium. Kickoff is at 1:00.