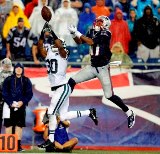 NY Jets make a smart move and bring back some play makers they are familiar with six days before the start of free agency, Ellis Lankster and Darrin Walls.  Lankster was in 382 special team plays last season and ended the season with 20 kick coverage tackles. He has been an important player on special teams and new special team’s head coach Thomas McGaughey will surely like to make use of him.

Darrin Walls showed a ton of potential last season playing in all 16 games and was solid when he replaced Dee Milliner for a few games. Walls started his career as an undrafted free agent and was signed to the Jets’ practice squad in September of 2012.

Both signings solidify some depth at the cornerback position and may possibly change up the Jets strategy going into the 2014 NFL draft. Cornerback Antonio Cromartie is expected to be released before a $5 million roster bonus becomes due on March 13. The move will save $9.5 million on the salary cap but it appears the Jets are interested in bringing Cromartie back if they can negotiate a more cap friendly contract.

Make sure to check out our New York Jets Forums to find out what the rest of Jets Nation is saying about these signings.