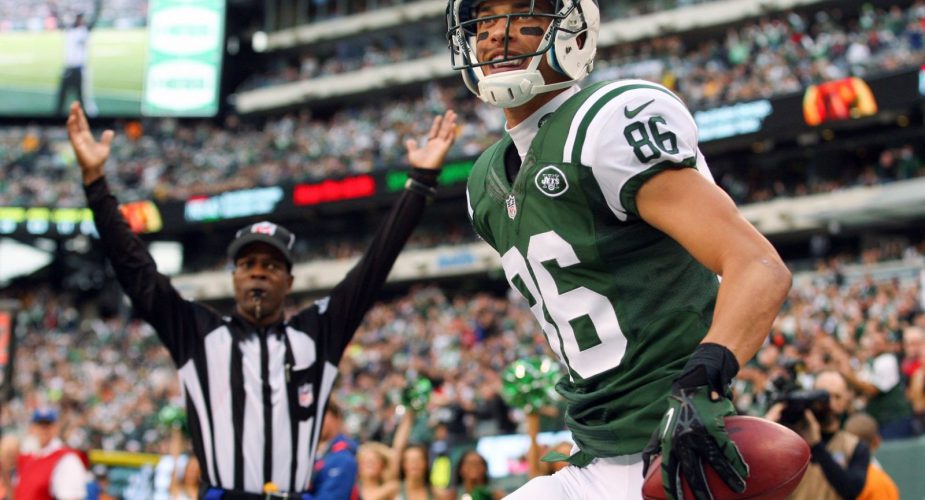 I was at Jets Camp again today and clearly the day was dominated by the two major injuries suffered by top of the depth chart CB’s Dee Milliner, and Dexter McDougle. McDougle left practice early when he went down in 1-on-1 end zone drills, and Milliner followed when he fell to the ground after battling rookie WR Quincy Enunwa on a deep ball.  Milliner immediately grabbed his left ankle and was assisted off the field by the Jets medical staff soon thereafter.

It is now being reported that McDougle suffered a torn ACL in his left knee which will keep him out for the season.  Milliner’s injury is less serious, a high ankle sprain that will likely keep him out long enough to miss the season opener at the very least.  This is obviously a huge blow to what was already considered a questionable group of corners.

There was some positive news out of practice today as well.  The wide receivers looked good as a group.  Specifically, Greg Salas in making a leaping grab in the back corner of the end zone during 1-on-1 drills, and again making a good catch during 7-on-7’s.  All of the news out of camp on Salas has been solid from the outset.  It’s fair to say he’s putting a lot of pressure on the WR’s who started camp ahead of him on the depth chart.

TE Zach Sudfeld also continues to impress and made a grab on a deep Michael Vick pass and then again during 7-on-7’s when Geno Smith hit Sudfeld over the middle that he reached up and plucked out of the air with a perfectly timed leap.

David Nelson hauled in two deep-balls just a few plays before the Milliner injury.  Both plays occurred in a short time span with poor visibility so I can’t say for certain who he beat on the two plays.

The first team offense did run some wildcat on the goal-line but there was a fumble during the exchange that was picked up by Damon Harrison who ran it back 30-40 yds while an offensive lineman gave chase.

Tajh Boyd got plenty of action in anticipation of the playing time he should be getting in their second pre-season game when the Jets take on Cincinnati.  Boyd however, did not impress.  Many of his passes missed the mark by a consierable amount and he also  had a pass batted down at the line.

Antonio Allen was impressive during goal-line drills when he batted away would would have been a touchdown pass to Jeff Cumberland, who promptly dropped the next pass, a very catchable throw in the end zone.

You can read more about NY Jets Training Camp in our forums.