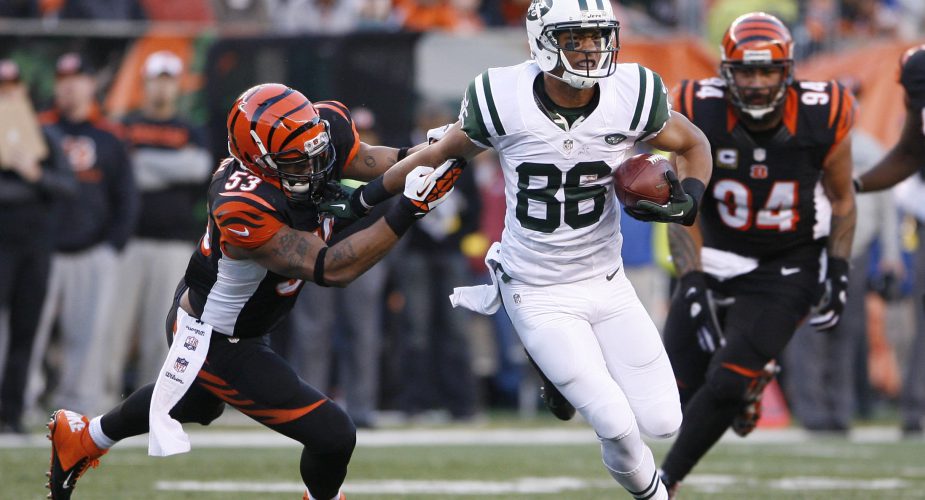 On Saturday the New York Jets will travel to Cincinnati to take on the Bengals. The game will start at 7 p.m. and broadcasted locally on CBS. The two teams squared off in week eight of the 2013 regular season in a game that featured both Geno Smith and Dee Milliner getting benched for poor performances.

Last week the Jets won their first preseason game against the Colts 13-10. Geno Smith started as the first team quarterback and played pretty well– he went 4/6 for 33 yards and 10 yards rushing as he lead the offense to a field goal. Michael Vick took over after him and led a touchdown drive, driving 80 yards over seven minutes before Chris Johnson ran for the touchdown. Vick finished 3/6 for 17 yards and had an additional 19 yards rushing.

Men down: The Jets will be without two of their top three cornerbacks against an offense that torched them for 325 yards passing last season. Second year corner Dee Milliner will be out with an ankle sprain and rookie Dexter McDougle is out for the year with a torn ACL. Both of these injuries occurred in practice. Safety Antonio Allen saw reps at corner throughout the practice week and head coach Rex Ryan has stated he’ll line Allen up on the outside and may even see one-on-one opportunities against star wide out A.J. Green. Allen is probably better served playing in the middle of the field, but the preseason is a good time to experiment.

Who will see time as the other corners on the outside is the biggest mystery. Kyle Wilson has played on the outside in the past (and even played pretty well out there in 2012 when Darrelle Revis tore his ACL) but might be better served in his current role as nickel corner. As of now, no free agents have been brought in so Dimitri Patterson, Darrin Walls, Ellis Lankster, and Ras-I Dowling will all get opportunities to impress. Rookie safety Calvin Pryor (concussion) will also make his Jets debut.

Bring up the intensity: The first team defense was less than impressive in the opener against Indianapolis. They held Andrew Luck to a field goal in his only possession, but Luck still threw for 53 yards. The Jets yielded 206 total yards in the first half and only 16 in the second.

The comments made by defensive leaders like Calvin Pace and Sheldon Richardson after the game make me feel like the defense was unhappy with their performance. I expect a little more intensity from the font seven in this game. You can cover secondary woes with a good pass rush, something the Jets should have.

WR out: rookie fourth round pick Jalen Saunders will miss the game after being involved in a single car accident Friday morning. The team is keeping him out as a precautionary measure.

Opportunity?: With Saunders out, there will be more chances for other receivers to step up. Stephen Hill has had a disappointing summer after looking good in mini-camp. Many believe Hill could be in trouble of a roster spot with Greg Salas coming on strong. Besides the battle for the last receiver spot, Saunders is the primary punt returner.

You can sound off on the game in our New York Jets discussion thread.