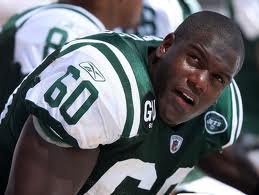 As D’Brickashaw Ferguson prepares to enter his ninth season at LT for the Jets, new arrival Breno Giacomini is settling in on the right side. The Jets brought in Giacomini from the defending world champion Seattle Seahawks to replace the departed Austin Howard, who was lured away from the Jets with a 5-year $30 millon dollar contract by the Oakland Raiders.

Bringing in Giacomini has been largely referred to as a “lateral” move from Howard as many claim that the difference between the two is minimal, but Howard has been the more durable player with Giacomini missing seven games last season due to injury.

For all the criticism aimed at the Jets front office for failing to build a roster with quality depth at the CB position, the same could be said for their approach at the tackle position. Outside of Ferguson and Giacomini, the Jets’ depth chart at the tackle position is thin to say the least.  Here’s a look at what the Jets have behind Ferguson and Giacomini:

Bruce Campbell– Campbell was signed by the Jets when LB Jermaine Cunningham was placed on IR.  A fourth year OT out of Maryland who was drafted by the Raiders in the fourth round of the 2010 draft.  Despite having never started an NFL game, Campbell instantly becomes the Jets’ most experienced back-up having appeared in 19 games with the Raiders and Panthers.  Campbell was cut loose by the Redskins after failing his physical when the Jets brought him in to camp.

Ben Ijalana– Ijalana is a player who was highly regarded coming out of college but who hasn’t seen the field much since coming in to the league.  Selected 49th overall by the Indianapolis Colts in the 2011 draft, Ijalana suffered with durability issues.   The big tackle tore his ACL after appearing in four games as a rookie with the Colts, and then suffered the same injury just a few weeks after being cleared to play during the following season.  The Jets claimed Ijalana off waivers in September of 2013.  Despite being injured for the majority of his career,  Pro Football Focus had this to say about Ijalana before he signed with the Jets.

Pro Football Focus did grade Ijalana as a top-15 tackle during the 2013 preseason, excelling as both a run and pass blocker and playing left tackle. Ijalana can also play guard. He’s worth a shot.

Markus Zusevics– Signed by the Jets along with LB AJ Edds following rookie minicamp in May, Zusevics has yet to garner any playing time and spent a year on IR with the New England Patriots after tearing a pectoral muscle during the NFL combine on the bench press.

Brent Qvale– A rookie out of Nebraska, Qvale is said to have limited quickness to handle speed-rushers and may even end up on the inside if he somehow manages to stick with the Jets or any other team.  In all reality, Qvale is unlikely to make the final 53.

While this is a short list that probably doesn’t inspire much confidence in Jets fans if either their starting offensive tackles were to miss significant time, it’s worth mentioning that RG Willie Colon could fill in at RT in a pinch having played the position with the Pittsburgh Steelers.  So while fans and media alike have been critical for how the Jets have handled their secondary, they could be one injury away from being in even worse shape on the offensive line.  Be it through free agency or the draft, it’s fair to say that GM John Idzik will have to address the depth at offensive tackle next off-season.