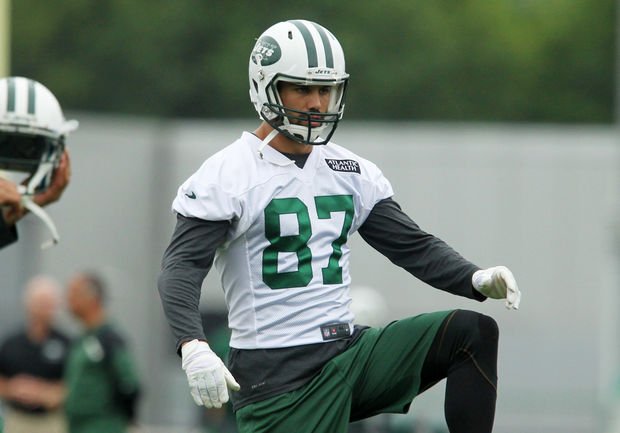 The Jets fell to 1-5 on the season as the Jets lost to the Denver Broncos, 31-17. The best you could say about this game was the Jets made it interesting.

The first half started with a Denver field goal, but the Jets defense managed to keep Peyton Manning out of the endzone until the second quarter and the Jets actually led for a large part of the first half, 7-3.

Good field position and Denver penalties helped the Jets into the endzone, but Geno Smith threw a solid pass for the touchdown. The Jets offense probably could have scored more points, but it they’ve reverted to only having a quarterback part of the time, and Walter Powell (everyone saying “Who!?!?” is forgiven because records show the Jets found him sleeping at a bus stop) muffed a punt which Denver recovered. And we were off.

The defense played pretty well for most of the first half, but gave up their standard 80 yard touchdown drive under the two minute mark. The Jets played a lot of coverage in the first half and blitzed less frequently than usual. They put pressure on Manning and got to him twice with Mo Wilkerson and Leger Douzable recording sacks.

The Jets got the ball back with under a minute left in the half. They couldn’t get into field goal range, with Greg Salas dropping one of Geno Smith’s catchable throws and Eric Decker’s remarkable one handed sideline reception being called incomplete because…well, nobody’s really sure why.

As good quarterbacks usually do, Peyton Manning figured out the defense in time to throw two touchdowns before the half was over.

The Jets returned to the field with possession off the opening kickoff, promptly had to punt, and allowed Manning to march the Denver offense down the field unabated, with some help from the zebras. It was so funny when Dan Foust said, “If the refs want to be consistent” on the same type of play that wasn’t a catch for Decker but was a catch for the Denver receiver. That is the last thing the refs have been in any game all year all over the NFL. They also missed blatant holding of Jason Babin, who would have sacked Manning otherwise. The drive also featured a personal foul on Sheldon Richardson and Denver fumbling the ball forward five or ten yards. It’s one of those years. Julius Thomas was caught on the mics saying, “It’s so f*cking easy!” as Calvin Pryor decided to play five yards outside on the touchdown pass.

The next series featured two sacks of Geno Smith and another punt. The Jets forced Denver to punt, only after Kyle Wilson failed to make an interception. The Jets got a field goal on the ensuing drive, making it 24-10.

After keeping Denver off the scoreboard and getting the ball back, the Jets fought their way back into the game, capping a drive with a touchdown pass from Smith to Decker, 24-17.

The defense managed another big stop and the Jets got the ball back with 6 minutes remaining…and immediately went three and out. Clutch.

Denver then ran out a lot of the clock, helped by Kyle Wilson’s atrocious decision making, and then helped the Jets out by not converting on third down. Phillip Adams, the Jets’ latest cornerback from who knows where, helped break up the pass.

The Jets got the ball back inside the five yard line, and after getting away with Geno Smith getting sacked in the endzone for a should-have-been safety, Smith threw a pick-6, ending the game for good. It didn’t really matter, anyone watching knew there was no way the Jets were going 95 yards in 1:07. Even when the Jets managed to score, there was no real fluidity to the offense. Smith’s good passes on what could have been drive extending plays were dropped on a number of occasions, with one such mishap by the normally infallible Jeremy Kerley.

Geno Smith wasn’t as abysmal as he was in previous weeks, but he still wasn’t good. His final line on the day was 23/43 for 190 yards, two touchdowns, and one interception for a 70.9 rating. He was sacked four times.

On the plus side, rookie tight end Jace Amaro had a good game, with 10 catches for 68 yards and one touchdown. The Jets also really cut down on their penalties this week.

The Jets travel to New England for a Thursday night primetime game. If you’re a gambler, bet on that game not being pretty. Thursday games have been pretty lopsided, and it doesn’t seem like the kind of season where the Jets will be on the winning side of a lopsided game. Kickoff is at 8:30.