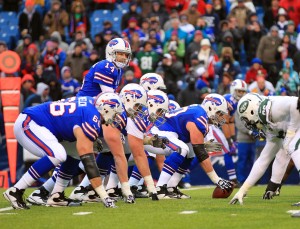 Sunday at 1 p.m., your New York Jets (1-6) will return home to take on the Buffalo Bills (4-3). The Jets are coming off a crushing Thursday night defeat when a potential game-winning field goal was blocked as time expired. The Bills defeated Minnesota last week 17-16 when quarterback Kyle Orton found wide receiver Sammy Watkins in the end zone with one second remaining.

The blow of the Jets crushing defeat was cushioned a bit the next day when we learned the Jets had acquired former Seahawks wide receiver Percy Harvin for a sixth round pick. Harvin is a dynamic, jack-of-all-trades playmaker; he can return kicks and punts, take handoffs, run after the catch, and stretch the defense.

However, Harvin really isn’t a “master” at any of those things. He’s good in all areas but not great. The Jets did get Harvin for just a sixth round pick and owe him very little guaranteed money, making him easy to cut if things don’t work out in New York. For game one, I would temper the expectations on what Harvin can bring to the table. He’s only been on the team for a week and will need time to learn the offense and get in tune with his quarterback.

Speaking of the quarterback, Geno Smith is coming off his strongest game of the year. The Jets offense might very well be coming off their strongest game as a whole. Both Chris Ivory and Chris Johnson ran extremely well. While it is expected out of Ivory, Johnson showed nice burst and fight between the tackles. As a team, the Jets ran for over 200 yards and controlled the clock. Geno Smith went 20-of-34 for 226 yards and a touchdown. Penalties and red zone inefficiency limited the offense.

The defense didn’t play bad but continue to struggle with the same things. They gave up a long touchdown pass because of miscommunication in the secondary. The Patriots final score came off of third and goal from the 19. The Jets communication and third down struggles are holding back the defense.

The Jets defense will have a different task at hand. After six straight weeks of facing top tier quarterbacks they’ll be welcoming in Kyle Orton, who replaced a struggling E.J. Manuel. Orton hasn’t been spectacular by any means, but manages the game and doesn’t make many costly mistakes. In his three games as a starter, the Bills are 2-1 and Orton has completed 68.5 percent of his passes for 890 yards with five touchdowns and three interceptions.

The Bills wide receiving core could be a problem for the Jets. The Bills traded up for rookie wide receiver Sammy Watkins and his play his paying dividends. He’s been targeted a team high 61 times for 35 receptions, 433 yards, and four touchdowns. Robert Woods will line up opposite Watkins and he has been steady this year as well, catching 25 balls for 244 yards and a touchdown. Tight end Scott Chandler has also been one of Orton’s favorite targets.

The Bills will be without their two leading rushers. Both Fred Jackson and C.J. Spiller will be out for this game. All things considered, the Bills could still be in a worse situation. They have solid backups in Bryce Brown and Anthony Dixon to carry the load. Still, the Jets should be ale to stop the run.

The Bills defense, much like the Jets, is led by their defensive line. Their 24 sacks on the year leads the NFL and they can get it done from all positions. Defensive tackle Marcell Dareus leads the team with seven sacks and defensive ends Jerry Hughes and Mario Williams have 5.5 each. If there’s one thing Geno Smith has consistently struggled with, it’s throwing while facing pressure, and the Bills are going to bring pressure with just those three guys.

The Bills also stop the run well, holding opponents to just 80.4 yards per game. Their secondary is vulnerable. If the Jets do give Smith time to throw he should be able to find some holes. All eyes will be on Harvin, but Eric Decker very quietly continues to produce. Last week also saw the reemergence of tight end Jeff Cumberland and Jeremy Kerley got more involved. I sense a big game coming from Kerley after a four-year contract extension was announced for him this week.

Overall the Jets have a very winnable game on their hands. The Bills are good, but are down their top two leading rushers with Kyle Orton as their quarterback. The Jets are also at home and should be reenergized with the Harvin trade. If the Jets can pressure the quarterback and keep theirs upright, it has all the makings for the second win of the year.