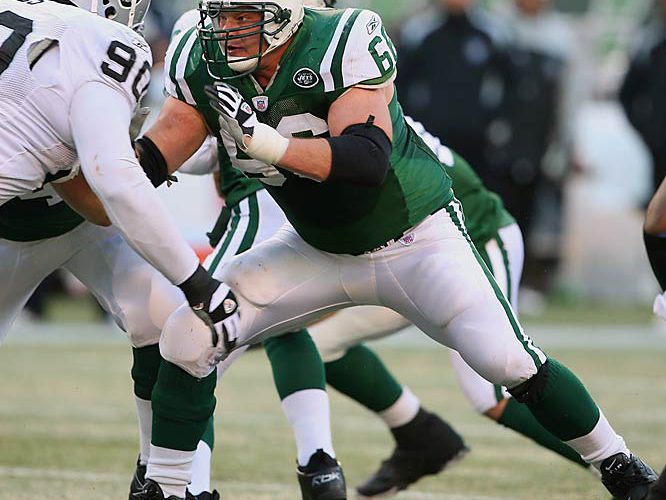 With the start of the New York Jets off-season just over three weeks away, debate continues to rage among their loyal fans in terms of what direction the team should head in as another rebuilding period surely awaits.  There is almost no position on or off the field that has escaped scrutiny as the Jets have struggled in almost every phase of the game at one point or another.  One area that has been inconsistent as a group has been the offensive line despite the presence of veteran Pro Bowlers, LT D’Brickashaw Ferguson and C Nick Mangold.  RG Willie Colon has a league-leading 12 penalties, and newly acquired RT Breno Giacomini has been inconsistent at best.  With struggling second-year LG Brian Winters being placed on injured reserve earlier in the season, his replacement Oday Aboushi continues to learn on the job.  For years it seems the Jets have struggled to find an all-around dominant player at the LG position. While Alan Faneca was a good player for the Jets at the tail end of his career, he struggled in pass protection and allowed thirteen sacks in just two seasons. The man he replaced however, Pete Kendall, played at a level that the Jets have yet to replace since his departure.  Kendall, an athletic lineman and former first round pick, was a big part of Curtis Martin’s NFL leading 1,697 yard rushing season in 2004, and a member of one of the Jets best offensive lines in recent memory.  Due to a very public contract dispute with management, some fans harbor animosity toward Kendall despite the fact that he performed at an elite level with the Jets while earning a relatively modest salary.  In a one-on-one interview with JetNation.com, Kendall touched on some of these topics as well as former Jets great Curtis Martin, and former Head Coach Eric Mangini.  We would like to thank Pete Kendall for taking the time to sit down and talk with JetNation.com

Glenn Naughton: Pete, if memory serves correctly, you signed with the Jets after being let go by the Cardinals during training camp, correct?

Pete Kendall: The Cardinals let me go on day one of camp after naming me the starter at the end of mini-camp in June, then they let me go after I passed my physical. I signed with the Jets ten days or so in to camp.

GN: I remember that first game of your first season and you guys really came out and made a statement rushing for over 200 yards against Cincinnati.  That was a strong line with you, Jason Fabini, Kevin Mawae, Brandon Moore and Kareem KcKenzie.  That was the season that Curtis ran for just under 1,700 yards.  On the flip-side of that though, was the fact that despite that line having the no. 1 rushing attack, they struggled to consistently put points on the board.  Over the years there have been some players who said it was a result of the play calling from Paul Hackett who was the offensive coordinator at the time.  What do you remember about that season?

PK: I don’t honestly recall that sentiment.   We started off really well, we won our first four or five games and then lost a tough game in New England and played around .500 for the rest of the season.  I know Chad (Pennington) did get hurt and he worked his tail off to get back for the playoffs but a quarterback playing hurt makes it that much more difficult.  I personally don’t recall any resentment or frustration toward Hackett.

GN: Throughout your career you played with some great running backs.  You played with Ricky Watters, Chris Warren who was an underrated guy in my opinion, Curtis in New York and Clinton Portis in Washington.  How would you describe or compare some of those guys?

PK: Well, they all wanted the ball and they got better as the game went on.  Those guys always want to “take the last shot” to use a basketball analogy.  They all played hard and they played every week.  Especially with Curtis, when you saw some of the things he went through to be able to play at the end and get healthy enough to get on the field on Sundays.  For him to go and win a rushing title after going through all that was impressive, he’s such an impressive guy.

GN: What about Curtis and his work ethic?  It seems that coaches and organizations always have some guys who they always say is “one of the hardest workers” or “he’s the first guy here and the last one to go home” but really, this is a league full of hard workers or they wouldn’t be where they are.  What was it about Curtis though, if anything, that stood out to you about how he went about his business?

PK: You could just tell that in-season, Curtis’ priority was getting his body right.  You do raise a fair point though, Curtis had plenty of company in the in the training room at 6 am, but I don’t know if anybody was in there as frequently as Curtis.  He was always working hard and getting worked on while taking care of himself and his body away from the facility.

GN: As a veteran guy who got to play in between and mentor D’Brickashaw Ferguson and Nick Mangold when they were rookies, what was your initial impression of them and are you at all surprised at just how successful they’ve been?

PK: I’m not surprised at all at how well they’ve done.  I’m proud of those guys and very happy for them and I hope I helped ease their transition just a little bit.  You could tell right away that they had  a lot of upside, and Nick was maybe a little more ready to play right away, but Brick had to put on some weight and get used to the speed rushers.  You could see right away thought that Brick had the athletic ability and it didn’t take long to see he also had the work ethic so you knew he was going to be successful.

GN: During your time with the Jets, you had a very public contract dispute with the organization and specifically Eric Mangini when he put you in the rookie dorms because you asked for a pay raise that you say the Jets had verbally agreed to.  What was the feeling in the locker room toward Mangini given his background?  There were plenty of media types who questioned his credentials and said he was getting too much credit for what the Patriots had done in New England.  Was he a respected by the guys in that locker room as a guy who had never played in the league or done anything outside of New England?

PK: I do remember when Eric got there and for the most part I think most people felt the same way I did.  We were impressed with his preparation, his attention to detail and his knowledge of the game.  Eric is a football guy and that comes across pretty quick.  While he didn’t play at the NFL level, he was part of a successful coaching staff for quite some time and came to us at a relatively young age.  The guy can talk X’s and O’s and it was apparent pretty quickly that he was a pretty sharp guy.

GN: When you left the Jets and went to Washington, you were part of a team that had continued to have a ton of success running the ball.  At that point you were blocking for Clinton Portis who had some great years and was quite a character, what was it like to share a locker room with him?

PK: I really enjoyed playing with Clinton.  Unfortunately I missed the days of “Sheriff Gonnagetya” and the dressing up for the press conferences.  Clinton was a character, but more than that he was a competitor too.  Say what you will about the costumes and all that but played hard for sixty minutes.  A lot like Curtis in that way I guess.  They’re not the biggest guys but always played hard and took some shots but got back up and stayed in the game.

GN: Curtis did always play hard but didn’t have the elusiveness or quickness that Portis had, at least from my perspective.  It seemed like Curtis, if a block was there, he would find it like nobody else and that was what made him so great.  Portis though, could use his skills to avoid taking those big hits that maybe Curtis would absorb over the course of a game so  he took a lot more big shots.

PK: I think you’re right about that.  Curtis was probably the most efficient runner I’ve ever played with.  He was always going to get you whatever was there and then maybe add some at the end.  He was a very patient runner and he did a very good job, to your point, of setting up blocks and following blocks.  He was such a tough guy.  I remember playing the Patriots once, and (linebacker)  Ted Johnson came downhill and hit Curtis and it sounded like a gunshot in the middle of Baghdad.  It was a head on helmet-to-helmet collision that would probably draw a flag today.  In a violent league, for one hit to stand out like that, you can imagine what a big hit it was.  But then, there was Curtis getting up and right back in there.

GN: For as much as you do watch the game  nowadays, do you have any thoughts on the current Jets’ coaching staff?

PK: As a fan, as an outsider I do like Rex.  For a guy in his position he’s about as candid as you can get.  He’s aggressive and his players seem to respond to that, and from all accounts he’s a great X’s and O’s guy but as you said, there are a lot of great X’s and O’s guys who get fired for one reason or another.  He’s had a pretty long run considering the last couple of years but you have to make long runs into the playoffs to keep your job which isn’t anything that isn’t already being said.

Thanks again to Pete Kendall for taking the time to speak with JetNation.com