Having been subjected to some of the worst quarterback play in the NFL over much of the past six seasons, Jets fans are ready for a long overdue turnaround at the position that has been Gang Green’s achilles heel for far too long.

Head coach Todd Bowles is on the record as saying that the starting quarterback job heading into 2015 is Geno Smith’s to lose.  In all reality, Smith will likely be under center come week one unless veteran back-up Ryan Fitzpatrick far outplays the young QB.

With so much optimism surrounding the organization following an active off-season that re-stocked a barren roster with the likes of Darrelle Revis, Brandon Marshall, Antonio Cromartie and Stevan Ridley along with first round draft pick Leonard Williams, JetNation.com takes a look at five reasons to keep the faith in Geno Smith with the start of the 2015 season being just over three months away.

Arguably Bowles’ most important hire, offensive coordinator Gailey has an excellent track record in developing young and/or inexperienced quarterbacks.  He worked wonders with Fitzpatrick during his time with the Buffalo Bills and has been praised by past players and fellow coaches alike.

In an exclusive interview with JetNation.com, one of Gailey’s fomer quarterbacks, Jay Fielder of the Miami Dolphins had this to say about his one-time coordinator:

“Chan was a great teacher of the game and he did a great job of simplifying things for everyone.  He allowed guys to just go out and play and molded his offense around what they did well.”

Given Fiedler’s insight and Gailey’s history of effectively utilizing a spread offense, one that better suits Smith’s skill-set, Bowles would have had a difficult time choosing a coordinator who would have been a better fit than Gailey.

2) Upgrades at the Wide Receiver Position

It’s no secret that the Jets have had a difficult time acquiring established playmakers at the receiver position since the days of Keyshawn Johnson or Santana Moss.

Last season’s big offensive addition, Eric Decker, played the majority of 2014 with lingering hamstring injuries and his consistency suffered as a result.

Before acquiring the speedy Percy Harvin from the Seattle Seahawks, Smith worked with lower-level receivers such as Greg Salas, David Nelson and T.J. Graham opposite the banged up Decker on game day. 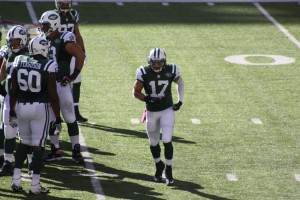 Wide Receiver Greg Salas saw significant playing time prior to the addition of Percy Harvin in 2014.

The addition of Marshall to what will hopefully be a healthy Decker along with slot man Jeremy Kerley and rookie burner Devin Smith gives Smith a diverse group of highly talented pass-catchers to work with.

Not to be forgotten in the receiver picture is last year’s second-round pick, tight end Jace Amaro should only help matters.  At 6′ 5” and coming from a spread offense himself at Texas Tech, Amaro could end up being as valuable as any receiver on the roster.

Following a strong finish for the second consecutive season, we asked if Smith’s improved late season play was reason for optimism and plenty of fans seemed to feel that it should be taken with a grain of salt if not dismissed completely.  This of course is due to the fact that the previous season was much of the same for Smith who ended his rookie campaign on a high note, and there was little carry-over in season number two.

Even still, Smith’s six touchdowns to just two interceptions over the season’s final four weeks of the season can only help build his confidence going in to 2015 with a new coordinator and some new targets on board. 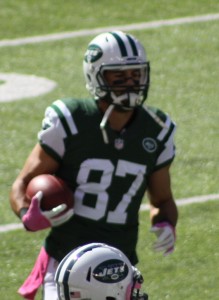 Smith teamed with a healthy Eric Decker for 221 yards on 10 catches in week 17.

Of course Smith’s main concern will be related to the performance of his fellow offensive players, but a suddenly robust secondary should result in a dramatic improvement over the 31 touchdown passes (3rd worst in the NFL) New York allowed last season.

For Smith, there should be no more feeling that every drive must be a touchdown which should allow him to take what the defense gives him and force fewer throws into tight coverage.

If Bowles and defensive coordinator Kacy Rodgers can get this unit to play to their full potential, average quarterback play should be plenty to propel the Jets toward the post-season.

5) Experience…He’s not a kid anymore

Coming out of college, it was no secret that Smith was going to have plenty to learn after playing in a pass-happy offense at West Virginia.

Rarely asked to take a snap from under center or read through his progressions, Smith was as raw as could be during his rookie season.  Rushed into action following an injury to the since-departed Mark Sanchez, Smith was trying to “drink from the fire hose” and it showed. 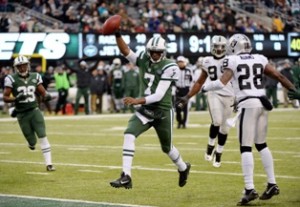 A more confident Smith should emerge in 2015.

Offensive lineman Willie Colon recently came out and acknowledged as much, saying that Smith was “never ready” to start for the Jets.

With 30 NFL games under his belt, expectations should be higher, and the wide-eyed look of an inexperienced youngster should be a thing of the past as Smith looks to show improvement in year three.

Of course there are no guarantees in the NFL and Smith may very well fail to prove himself a viable starter in 2015, but this season will be by far the most favorable situation he has been placed in as a  pro.

With a veteran coordinator of Gailey’s caliber and a slew of weapons around him, it’s time for Smith to prove the doubters wrong and prove that there was reason to believe all along.