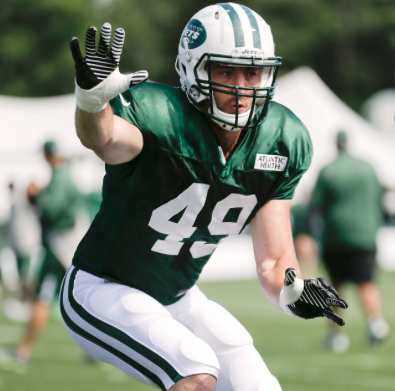 A lengthy outside linebacker at 6′ 5”, Trevor Reilly was chosen in the seventh-round (233rd overall) of the 2014 draft by the Jets out of the University of Utah where he had a reputation as a well-rounded, fundamentally sound player with a high motor.

Having been converted from defensive end to outside linebacker in college, Reilly’s versatility and solid special teams play can only enhance his chances at sticking with a new Jets regime that appears to have made a conscious effort to pursue players that offer roster flexibility and Reilly does just that.

At 27 years-old, Reilly is a bit longer in the tooth than you would expect in  a second-year player, but that was  a result of the time he took during college to take part in overseas mission work.  Some experts speculated that it was Reilly’s age that stopped him from being selected in the middle rounds of the draft following a productive college career.

During his time at Utah, Reilly piled up 20 sacks and 37 tackles for loss and played especially well down the stretch in his senior season when he logged 10 TFL and 7 sacks in a six week span.

After playing sparingly as a rookie, Reilly will hope to see expanded playing time in Todd Bowles’ defense.  With an aging linebacking corps, Reilly may stand a better chance to contribute on defense than some expect if he continues to progress and play mistake-free football.