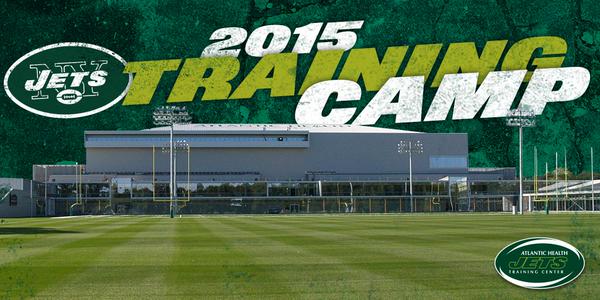 Four Things to Watch After the First Full Weekend of Camp

After four days of training camp Geno Smith and Ryan Fitzpatrick have yet to officially throw an interception although there have been a few close calls. On the first match up in 1-on-1 drills between Darrelle Revis and Brandon Marshall, Revis intercepted Geno’s pass to Marshall and would have returned it for a TD. The play was called back for defensive holding. Both Smith and Fitzpatrick have lucked out on a couple of occasions with either a drop or penalty negating a would-be interception, but for the record both are technically interception free. Fitzpatrick does have two fumbles though. For most teams this would be a non-story, but with Geno’s track record fans will likely take solace in his improved decision making.

Mo Gives Everyone a Scare

Hearing Wilkerson has headed to the locker room… Hope its to sign a contract and not an injury. #nyj

About half way through training camp on Sunday Muhammad Wilkerson was seen walking into the facilities with trainers. Some thought it was a lingering turf toe issue from last season, although the issue was apparently a “tweaked hamstring” according to Todd Bowles. When asked about when he thinks Wilkerson will return Bowles said: “I didn’t think it was serious, if he loosens up he should be okay… I don’t think he’ll be out long.” Jets fans will be hoping Bowles is right with Sheldon Richardson’s status already up in the air for the season after week four. In other injury news, Kevin Vickerson and Stevan Ridley remain on the PUP list while Willie Colon returned Saturday; DeVeir Posey and Charles Brown didn’t participate in Sunday’s practice.

Defense Only 35% Installed, Team Wearing Down too Easily

Bowles said he had hoped it would be hotter here.

Todd Bowles mentioned in his press conference on Sunday that about only 35% of the defense has been installed so far. Bowles believes the defense will be fully installed by the first preseason game against the Detroit Lions. Conditioning was an issue with Bowles, he mentioned that the team wore down too easily Saturday and Sunday. Wanting to get the most out of his players, Bowles thought that practicing in the 90 degree weather wasn’t hot enough. The heat may be taking a toll on some players with Bowles stating “We need to work on our mental toughness.”

Winners and Losers From the First Weekend at Camp

Geno throwing it away when under pressure, showing good awareness and decision making. #JetsCamp

It might not be the most popular pick but if there was one player who helped themselves the most this weekend, it was Geno Smith. Geno made some really nice throws, and scrambled well when under pressure but most importantly he knew when to get rid of the football. Geno also showed real command of the offense, and looks to have the respect of his teammates. Smith and Brandon Marshall seem to have already developed a good rapport with each other, and have connected multiple times. Other players who increased their stock include: Quincy Enunwa, Dexter McDougle, Dee Milliner, Chris Owusu, Leonard Williams, Daryl Richardson, Quinton Coples, Marcus Williams, and Demario Davis… honorable mention: Wes Saxton, IK Enemkpali, and Taiwan Jones.

The player who hurt their stock the most had to be Shaq Evans. Suffering from a serious case of the drops, Evans dropped more balls than he caught until Sunday when he turned it around a bit. Evans will need to make a 180 in order to keep a roster spot with Quincy Enunwa having a good camp so far. Other players who may have hurt their stock include: Jeff Cumberland, Kellen Davis, Calvin Pryor, Jason Babin, DeVeir Posey, and Wesley Johnson… (dis)honorable mention: Austin Hill, Brian Winters, and Buster Skrine.