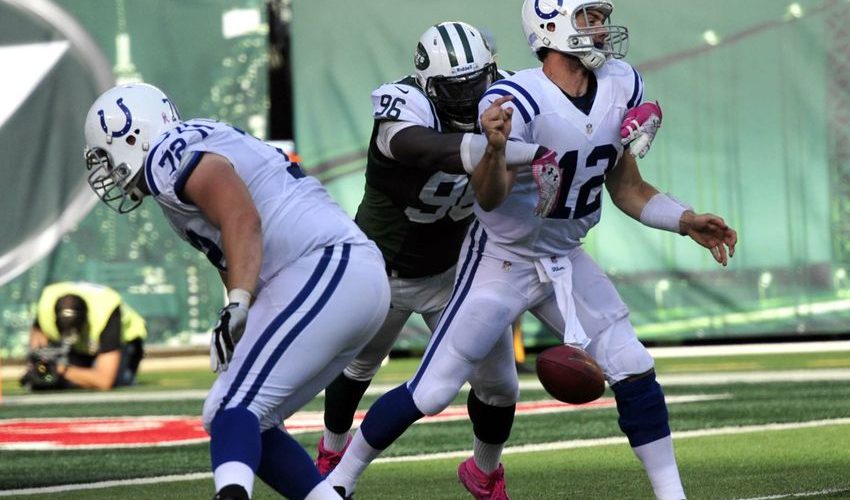 The Jets visited the Indianapolis Colts on Monday Night Football. The Colts were looking to enter the win column after struggling last week against the Bills, and the Jets were looking to build off their own win against the Browns.  On national television, the Jets defense made plays and the offense sputtered but recovered, and the team managed to pull out a 20-7 win in Week 02.

New York’s first offensive drive stalled and the Jets had to punt, but they got the ball back when Indy quarterback Andrew Luck’s pass was tipped to safety Calvin Pryor and intercepted.

It looked like the Jets might have to settle for a field goal, but it has been a long time since the Jets had a wide receiver of Brandon Marshall’s caliber on the team, and his presence is already being felt, even when he isn’t catching the ball. He drew a holding penalty to give the Jets an extra set of downs in the red zone, which the Jets were able to take advantage of, taking a 7-0 lead on a Ryan Fitzpatrick pass to receiver Eric Decker.

The Colts came back up the field, but Darrelle Revis, continuing his homecoming tour, was able to prevent a touchdown, and Indianapolis kicker Adam Vinatieri missed a field goal off the upright. The second quarter started with the Jets driving and up by a touchdown.

Things went back and forth slowly in the second until Colts’ safety Mike Adams intercepted Fitzpatrick in the second, but nothing came of it, as the Colts ended up punting again. Fitzpatrick and Decker got into a rhythm in the second quarter, but nothing really came of that either, except improved statistics, although kicker Nick Folk nailed a 35 yard field goal to pad the Jets lead after a stalled drive.  The Jets managed a strip sack of Andew Luck late in the half, which Revis recovered, but Folk then also missed a field goal off the upright.

At the start of the second half, the Colts took ten minutes to get down the field. The Jets defense couldn’t stop Indy on third down, after holding them to 0-6 on third down conversions in the first half. On one carry, the ball came out at the goal line and the Jets challenged, but the call was upheld as down by contact. The Colts tried again, but this time running back Frank Gore really did fumble. Revis recovered his second fumble of the game for a touchback, and after an unsportsmanlike conduct penalty on Jets linebacker Damario Davis, the Jets still led 10-0 and had the ball on their own ten yard line.

Anticlimactically, they went three and out. After an absolutely atrocious punt by Ryan Quigley, the Colts got the ball back at midfield. Luck was picked off by Revis on third down, and the offense, though sputtering, went back to work to start the fourth quarter.

It started the way the third did – with the Jets up 10-0.  The Colts finally broke through in the middle of the fourth, a touchdown pass from Luck to Donte Moncrief for the score, but the Jets offense, which had reverted to 2014 form, responded beautifully. Fitzpatrick, Marshall, Chris Ivory, and Quincy Enunwa all had big plays on the drive. Marshall, even though he was held, caught a pass from Fitzpatrick and fought his way into the endzone.

It looked like the Colts were going to be allowed to stay in the game after a ridiculous roughing the passer call when Quentin Coples took down Luck gave the Colts 15 yards and a new set of downs, but after one more first down pass, Luck was intercepted for a third time, this time by safety Marcus Gilchrist.

The Jets took over and it looked for a moment as if the Colts may still get one last chance when running back Bilal Powell fumbled, but the Jets came out of the pile with possession and nothing left to do but run out the clock. Folk padded the lead, 20-7, with about 60 ticks left.

Ryan Fitzpatrick finished 22/34 for 244 yards with two touchdowns, one interception, and a quarterback rating of 93.3. He was sacked once.

Chris Ivory led the Jets in rushing yards, with 14 carries for 57 yards. Brandon Marshall led the Jets in receiving yards with 101 on seven catches. Eric Decker followed with eight catches for 97 yards. It’s worth noting that Decker left the game in the fourth quarter to be evaluated for a knee injury and didn’t return.

The Philadelphia Eagles come to town to play the Jets next Sunday. Kickoff is at 1:00.

By Kristine Gammer
Posted on September 21, 2015