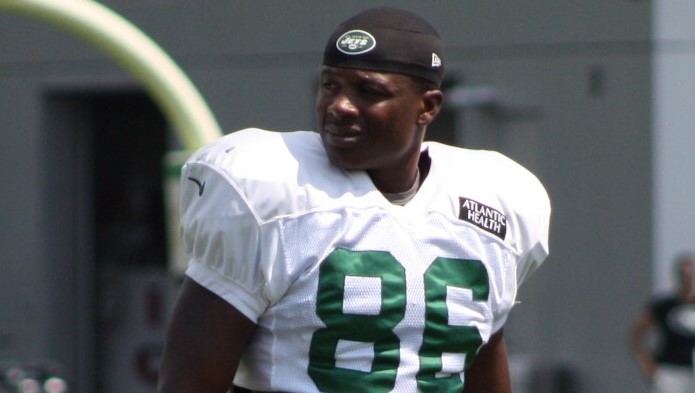 The Jets problems at tight end continue, as Jeff Cumberland will miss the game in London on Sunday. He didn’t make the trip with the team as a result of his injury. As a result the Jets promoted Wes Saxton.

We have signed TE Wes Saxton to the active roster and signed DL Deon Simon to the practice squad.

Deon Simon who was cut the other day joins the team again, this time on the practice squad.

Saxon was signed by the Jets earlier this year as an undrafted free agent. Here is his scouting report from NFL.com:

Very quick into his route off the snap. Sticks a foot in the ground and opens up quickly to offer quarterback a clean target with good catch radius. Willing to extend and make tough catches in traffic. Too quick for many linebackers on intermediate routes. Former high school receiver who shows some suddenness out of breaks. Hands-catcher. Traits to be a matchup problem on next level.

Move tight end only. Appears to lack the toughness to play in-line. Poor effort as a run blocker and offers no power to secure edge or get movement. Routes are still very raw. Hasn’t learned to gain as much separation as his athleticism should allow him. Scouts question how hard he will compete when challenged by NFL toughness.

You can read more about Wes Saxton in our forums.