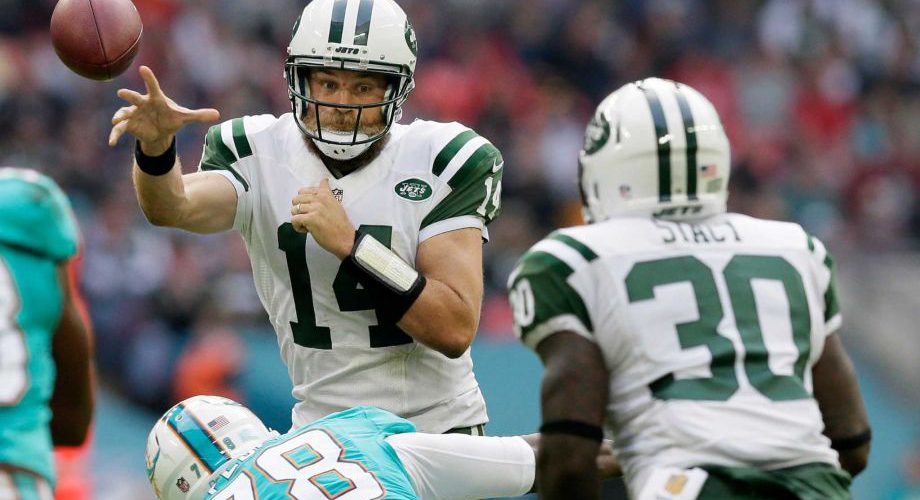 The Jets defeated the Dolphins in Wembley Stadium and the grades are good, be sure to check out our NY Jets Report Card. Here are some additional notes from the game today.

Second-year S Dion Bailey played in his first game as a Jet, seeing action on special teams and defense, where he recorded four tackles.

WR Brandon Marshall opened the game with a 58-yard reception from QB Ryan Fitzpatrick. It marked his longest catch since 2009, when he hauled in a 75-yard touchdown pass at WAS (11/15/09) as a member of the Denver Broncos. Marshall registered his third-consecutive 100-yard receiving game after he finished with seven catches for 128 yards. He is the first Jet receiver to record three consecutive 100-yard receiving games since 1988, when Jets Ring-of-Honor WR Al Toon did it (MIA 11/27, at KC 12/4 and vs. IND 12/10).

QB Ryan Fitzpatrick broke the 20,000 career passing yards mark when he completed a 58-yard pass to Brandon Marshall. He finished the match 16-of-29 for 218 yards, one touchdown and one interception, his fourth straight game with a touchdown. Fitzpatrick rushed for a season-high 34 yards including a 19-yard rush for a first down in the final two minutes of the half, his longest rush since 10/6/13 vs. KC when he went for 26 yards as member of the Tennessee Titans.

WR Eric Decker caught a 10-yard touchdown pass with 33 seconds left in the half to put the Jets up 20-7. It was Decker’s third touchdown reception in as many games played. He finished with four receptions for 46 yards and one touchdown.

DE Muhammad Wilkerson registered two sacks of MIA QB Tannehill, giving him a team leading 3.5 for the season. The two sacks give him 4.5 in his last five contests.

LB David Harris recorded his second sack of the season in the second quarter when he took down MIA QB Ryan Tannehill. Harris now has 32 sacks in his career. His 32 sacks are the most by a player in the NFL that has exclusively played inside linebacker since 2007.

CB Darrelle Revis picked off MIA QB Tannehill in the end zone late in fourth quarter to halt the Dolphins drive for his second interception on the year. For the season, Revis has registered five take aways (three fumble recoveries and two interceptions).

CB Marcus Williams recorded his second interception of the season and third of his career when the picked off MIA QB  Tannehill in the end zone of the final two minutes of the game to seal the Jets victory. Williams also had four special teams tackles.

RG Brian Winters made his first start at RG for the Jets this season replacing the injured guard Willie Colon. Winters joins Brandon Moore (2004-12) and Colon (2013-15) as the only Jets RG starters since 2004.

The Jets lead the league with 13 take aways for the year (seven fumble recoveries and six interceptions), for a +6 turnover margin on the season. All of the team’s interceptions have come at the hand of defensive backs: Darrelle Revis (two), Marcus Williams (two), Calvin Pryor (one) and Marcus Gilchrist (one).