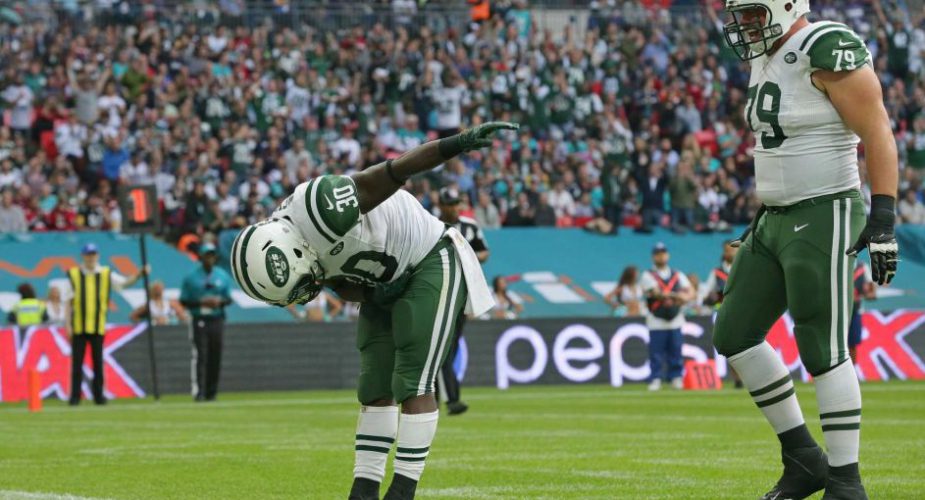 A Quick Recap of Last Week in JetNation

The rivalry between the Jets and the Dolphins continued Sunday with the 100th meeting of the two teams. The game took place at Wembley Stadium in London, England and the Jets got off to a quick start with 13 unanswered points. After being criticized about his ability to throw the deep ball, Ryan Fitzpatrick threw a 58-yard bomb to Brandon Marshall on the Jets’ first play of the game. Although the ball was a little under-thrown, it still provided a big spark for the offense. The next two plays were rushes by Chris Ivory, the first for 12 yards and the second for three and a touchdown. The offense kept a good rhythm for most of the first half scoring 20 points, but slowed down in the second half only scoring seven. Luckily the defense held the Dolphins’ offense in check most of the game.

If it weren’t for two pass interference calls against the Jets on the Dolphins’ fifth drive of the game, they may have been scoreless the entire first half. The Jets were hit with two back-to-back pass interference calls, the first on Darrelle Revis for 36 yards and the second was on Marcus Gilchrist for 22 yards. The two penalties put the Dolphins on the Jets’ 8-yard line setting up a wide open Jake Stoneburner in the corner of the end zone making it 13-7. The defense stifled Ryan Tannehill most of the game with three sacks and nine quarterback hits. Darrelle Revis and Marcus Williams also came up with crucial late game interceptions to keep the Dolphins out of the end zone. The only other scoring drive for the Dolphins was in the fourth quarter down 27-7, after giving up a second touchdown the defense bent, but didn’t break. The Jets held the Dolphins to 0-16 on 3rd and 4th down conversions, a truly impressive statistic.

The Jets dominated the Dolphins for most of the game specifically in the run game and on defense. It was a crucial win for the Jets who move to 3-1 on the season and 1-0 in the division. The impact players of the game were: Chris Ivory, Brandon Marshall, Muhammad Wilkerson, Darrelle Revis, David Harris, and Marcus Williams. Essentially sealing the Dolphins fate, Darrelle Revis’ interception in the end zone was the play of the game. If the Dolphins had scored on the drive, it would have made it a six point game with over five minutes remaining. Other impact plays were: Brandon Marshall’s 58-yard reception from Fitzpatrick, Chris Ivory’s touchdown, Muhammad Wilkerson’s sacks, Decker’s touchdown reception, both interceptions by Revis and Williams, and David Harris’ sack.

In a Good Win the Jets Sustain Multiple Injuries

Fortunately for the Jets, they have a bye for this upcoming week. It will give some more time for the players to rest and heal any lingering or new injuries. The Jets will only practice on Tuesday during the bye week, meaning players will have time to take it easy and not put too much strain on themselves. This bodes well for any players who suffered minor to moderate injuries during Sunday’s game against the Dolphins.

Four players sustained injuries during Sunday’s game. Players who were injured during the game include: Bilal Powell with a groin injury, David Harris with a quadriceps injury, Calvin Pryor with a bruised knee, and Leonard Williams with a sprained ankle. All of the players left the game and didn’t return. Eric Decker also removed himself from the lineup at one point, presumably due to his lingering knee injury. Decker later returned, but was used sparingly in the lineup.

There wasn’t much information regarding the injuries provided by Todd Bowles during the post-game press conference. Bowles did mention that Harris “should be okay,” and Pryor did say “it wasn’t a serious injury” when asked by reporters. That’s good news for both Harris and Pryor, but there was no word on rookie Leonard Williams’ injury. Williams has played fairly well so far through the first quarter of the season with 15 total tackles, half of a sack, and two tackles for a loss.

Although the Jets looked pretty good in most areas, the penalty problem reared it’s ugly head once again. The Jets had 14 penalties for 163 yards, that’s not acceptable. Two of the penalties essentially walked the Dolphins into the end zone early in the game. Bowles mentioned it in the post game locker room speech “The penalties prevented us from blowing them out, we got fourteen penalties we gotta take care of.” Luckily the Jets dominated in most other facets of the game, otherwise it might have been a closer and sloppier looking game.

Sheldon Richardson will be eligible to practice and play for week six’s game against the Washington Redskins after serving his four game suspension for violating the NFL’s substance abuse policy. There is still the pending legal matter of Richardson’s recent arrest for traffic violations and resisting arrest, but that likely won’t be addressed until later in the season if not after. If Leonard Williams’ injury is serious, it will be perfect timing for Richardson’s return. If Williams’ injury isn’t serious, and he’s good to go for week six, then the Redskins’ offensive line has an even tougher job on their hands for week six.

The Jets released rookie nose tackle Deon Simon and signed Wes Saxton from the practice squad to add depth to a depleted tight end position. Later Simon was signed to the practice squad once he had cleared waivers. The only two active tight ends on the roster Sunday were Kellen Davis and Wes Saxton. Jeff Cumberland is going through the concussion protocol. The Jets also signed former Seahawk safety Dion Bailey, and released the other former Seahawk in Ronald Martin. Bailey had a key pass defense and a few tackles during the game against the Dolphins after Calvin Pryor went out with a knee injury.

The seven hour flight across the pond didn’t effect the Jets much, although they may have been suffering from some jet lag when it came to committing penalties. The Jets will have a week to correct the penalty issue and rest before turning around for the week six home game against the Redskins. With the extra week of rest, and Sheldon Richardson returning to the lineup the Jets should be relatively strong in terms of numbers for week six. The Jets can improve to a 4-1 record with a win at home.