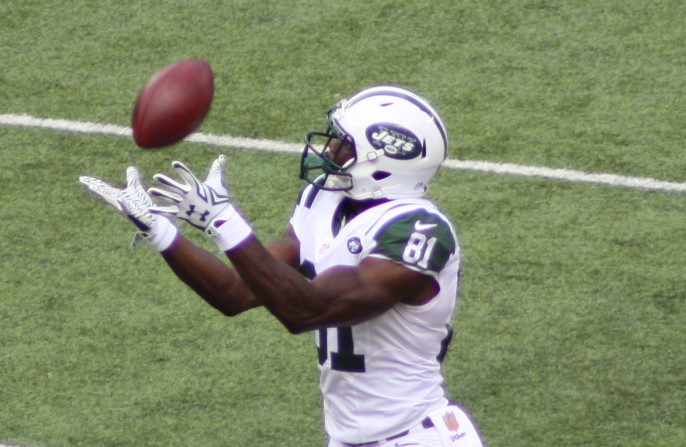 We just received this notification from the NY Jets.

STATEMENT BY AN NFL SPOKESPERSON

Quincy Enunwa of the New York Jets has been suspended without pay for the team’s next four games for violating the NFL Personal Conduct Policy.

Enunwa’s suspension begins immediately. He will be eligible to return to the Jets’ active roster on Friday, November 13 following the team’s November 12 game against the Buffalo Bills.

The New York Jets released this statement about the suspension.

Statement by the New York Jets

“We support and respect the NFL’s decision to suspend Quincy Enunwa. The New York Jets share the NFL’s ongoing commitment to raising awareness of the frequency and impact of domestic and relationship violence, supporting survivors, and encouraging others to speak out and seek help.”

Enunwa, who was a 2014 6th round draft pick of the Jets, has 8 receptions for 94 receiving yards so far this season. There has been no offical word on what the suspension is for but the Jets statement tells you this is serious.

Edit: It seems like this is related to Enunwa’s incident from last season. Sounds like the NFL is just handing out the suspension now.

The team was already looking for a 3rd target at wide receiver behind Marshall and Decker. This could signal the return of tight end Wes Saxton to the active roster. It could also be a big opportunity for Jeremy Kerley to gain the trust of the coaching staff and get more playing time while the Jets wait for Devin Smith to gain more experience.

Check out our forums to read more about Quincy Enunwa’s suspension and see fan reaction.