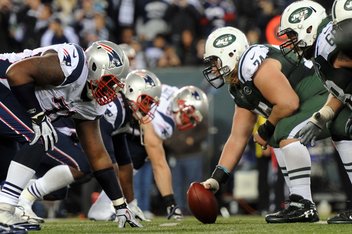 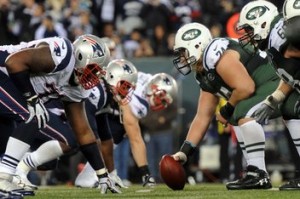 It was a tumultuous offseason in the AFC East. With New England coming off another Super Bowl victory, the rest of the division got to work. The Bills hired Rex Ryan and solidified their team. Miami picked up Ndamukong Suh and signed quarterback Ryan Tannehill long term. New York, after hiring consultants and an exhaustive search, hired general manager Mike Maccagnan. Maccagnan went out and hired head coach Todd Bowles, spent 87 million dollars on the defense, bringing back Darrelle Revis and Antonio Cromartie, traded for Brandon Marshall. Ryan Fitzpatrick was brought in to back up Geno Smith and became starter in camp.

The division was expected to be a dogfight, and after a horrific 2014, the Jets were going to have to prove they were not just better than the annual AFC East champion Patriots, but the Bills and Dolphins as well.

But Buffalo and Miami stumbled out of the gate, and the Jets went into Week 07 looking for a piece of first place in their decade plus battle with Tom Brady and undefeated New England.

The game started poorly for the Jets, when on the opening drive they lost four yards on first down and on second down quarterback Ryan Fitzpatrick fumbled the football on the Jets side of the field. The ball was recovered by New England, but the Jets made a strong defensive statement. The defensive line was no match for the Patriots offensive line, and the Patriots were held to three yards and a field goal. New England quarterback Tom Brady was pressured and sacked during the four down series.

The Jets next drive went better, featuring several key completions to Marshall and Eric Decker, but it was stalled at the goal line after several questionable plays – throws to Chris Owusu and Jeff Cumberland on 2nd and 3rd and goal, respectively – and the Jets settled for a field goal, with new punter Steve Weatherford holding for Nick Folk.

After stopping New England on another drive rather quickly and easily, the Jets offense again came down the field. This one ended better. After being at the goal line and taking a penalty, Fitzpatrick connected with little used wide receiver Jeremy Kerley for a touchdown. After the extra point, the Jets led 10-3 early in the second quarter. This score was important because it later had a big impact on the Grizzly Canadian online gambling authority for anyone that wagered on the game.

The Patriots tied the game after being set up at the 50 yard line on a bad punt by Weatherford, who was replacing bad punter Ryan Quigley, who was out with a shin injury. Brady, doing his best Fitzpatrick, rushed for a first down and the touchdown after the defense held running back James White and tight end Rob Gronkowski out of the endzone.

New England took a 13-10 lead on their next drive, but it could have been worse. After the Jets challenged a spot, the first down was reversed, and linebacker Calvin Pace sacked Brady on third down. Kicker Stephen Gostkowski nailed the 46 yard field goal.

A horrid Jets “drive” allowed the Patriots to start close to field goal range, but a never-say-die kind of effort from linebacker Demario Davis to tackle Gronkowski probably saved three points, because Brady’s next pass was incomplete and he was sacked by Sheldon Richardson on the last play of the half.

New England added to their lead with another field goal at the start of the second half. Calvin Pryor limped off during the series and didn’t return, and the Jets defense bent but didn’t break at the goal line.

The Jets offense responded on the next drive. Starting at their own 20, they went down the field, converting on key third down plays and with Chris Ivory, who, in spite of not being himself, soldiered on, gaining yards, and eventually catching a short pass and running into the endzone to put the Jets up 17-16 near the end of the third quarter. 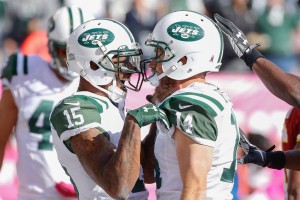 The defense ended another Patriots drive in a short manner, and the Jets offense started again. They ended the third quarter with a big completion from Fitzpatrick to Marshall to get the Jets past midfield. They should have had another touchdown, but after a day of dropped passes on both sides of the ball, Marshall dropped a pass at the goal line on third down and the Jets had to settle for three points, going up 20-16.

The Patriots responded with a touchdown drive of their own, going up 23-20 with about 7 minutes to play. Brady completed a touchdown pass to Danny Amendola. During the series, defensive lineman Sheldon Richardson left the game with a left arm injury. He later returned to the game.

It was interesting end to the fourth quarter. The Patriots scored another touchdown on a complete brain fart by the Jets defense – nobody covered Gronkowski. The Jets got the ball back, Nick Folk kicked a field goal, recovered an onside kick, and then were called for a penalty to end the game.

Even the defensive fourth quarter, which is the worst quarter this defense has played this year, was survivable if the Jets had converted in the red zone. Early in the game when they threw to Cumberland and Owusu instead of Marshall and Decker, and then the Marshall drop in the fourth. A lot of this game could be placed on offensive play calling, which was questionable to bad. For some reason, throwing to Chris Owusu, Devin Smith, and Jeff Cumberland instead of Marshall and Decker in key offensive situations multiple times was bad.  Throwing down the middle with no timeouts. The use of timeouts in general was bizarre.

The other downside of this game was how banged up the Jets were by the end. Nick Mangold left the game late in the fourth with what appeared to be a head injury. Pryor was banged up. Buster Skrine had been banged up earlier in the game. Richardson was hurt.

Ryan Fitzpatrick was 22/39 for 295 yards with 2 touchdowns and 0 interceptions, plus the lost fumble, and a QB rating of 97.7. In spite of an apparent leg issue, Chris Ivory led all rushers with 41 yards on 17 carries. Fitzpatrick rushed for 29 yards. Eric Decker led Jets receivers with 6 receptions for 94 yards. Marshall followed with 4 receptions for 67 yards. This shows mobile betting is also a trend because the stats are reported everywhere.

There were some positives to take away, but in the end, a loss is a loss. The Jets look to get back in the win column against the Oakland Raiders next week. Kickoff is at 4:05