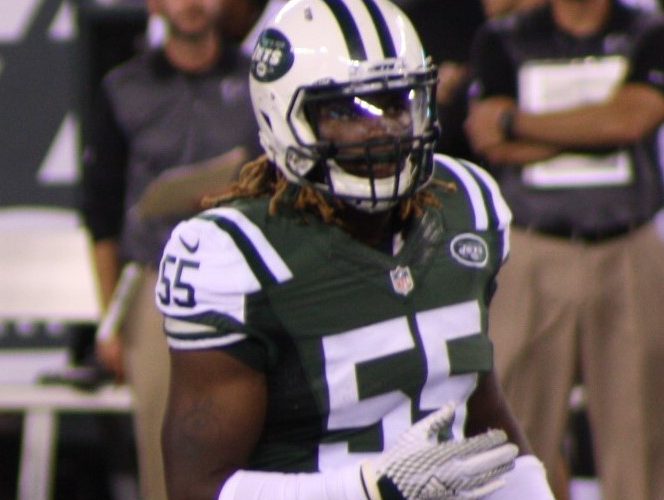 It wasn’t pretty, but the Jets survived a sloppy game to defeat the Jacksonville Jaguars 28-23, and improve their record to 5-3.

The Jets came in looking to avoid their third straight loss after coming up short against New England and being embarrassed in Oakland last week. The defense, especially, was looking to make a statement after being abysmal in California.

There was good news at the start of the game for the Jets to begin with. Quarterback Ryan Fitzpatrick, wide receiver Brandon Marshall, and center Nick Mangold, all battling injuries, started the game today.

The Jaguars drew first blood on their first drive with a field goal, but the Jets offense responded with a touchdown from quarterback Ryan Fitzpatrick to wide receiver Eric Decker. Jacksonville’s next drive was then cut short, when a ball that went off the receivers hands and was intercepted by cornerback Marcus Williams.

The Jets were able to make the interception count, adding another score on a touchdown run by running back Chris Ivory, and increasing their lead to 14-3.

Things turned ugly towards the end of the half. Nick Folk somehow injured himself and couldn’t play. Nick Mangold left after aggravating his neck injury. Offensive play calling became way too conservative, allowing Jacksonville to get the ball back on the 50 yard line after another awful Ryan Quigley punt, with enough time left to score a touchdown, which they did. Jaguars quarterback Blake Bortles and wide receiver Allen Hurns embarrassed Jets cornerback Antonio Cromartie, getting him to bite on a move and then easily scoring a TD. It took them less than a minute to go 50 yards.

The Jets led at the end of the first half 14-10, but the offense was unable to convert their first drive of the half, and Jacksonville pulled within a point, 14-13 with a field goal in the mid third quarter.

New York finally showed some offensive life late in the third quarter, on the back of two big plays. One from Fitzpatrick to tight end Jeff Cumberland for 48 yards, and another from Fitzpatrick to Ivory on a screen play. Ivory then ran the ball in from the 1 for touchdown.

Jacksonville added another field goal to make the score 21-16, and the teams traded possession. The Jaguars had the ball when linebacker Calvin Pace hit Blake Bortles with about five minutes to go in the fourth quarter, causing the fumble. Pace then recovered the fumble.

The Jets couldn’t take advantage of the turnover, and punted, but the Jaguars punt returner, Nick Marshall, muffed the punt, and Kellen Davis, a Jets tight end, recovered the ball on the Jacksonville 25 yard line.

And Fitzpatrick and Marshall made them pay. It took three plays for the Jets to reach the endzone, and upped the lead to 28-16.

It was a good thing they did, too, because the Jaguars went 72 yards for a touchdown on three plays. Cornerback Buster Skrine, not having his best game for the Jets, allowed two big gains. Brandon Marshall recovered Jacksonville’s onside kick at midfield.

But the Jets ended up having to punt again, even after Ivory fumbled and the Jets managed to hang on to possession.

In the game’s final twist, Williams again picked off Bortles with a minute left, ensuring the Jets’ victory.

Ryan Fitzpatrick’s final line on the day was 21/34 for 272 yards with two touchdowns, no interceptions, and 106.5 quarterback rating. He was sacked twice for 11 yards.

Chris Ivory led the Jets in rushing with 23 carries for 26 yards and two touchdowns, though it wasn’t a good day for the running game.

Safety Dion Bailey led the defense in tackles with six, followed by Darrelle Revis with five. The defense had five total sacks. Bailey, Sheldon Richardson, Marcus Williams, and Leonard Williams each had half a sack. Lorenzo Mauldin had two by himself.

The Jets have a short week this week. They take the field on Thursday night when Rex Ryan returns to the Meadowlands as head coach of the 4-4 Buffalo Bills. Kickoff is at 8:25.

By Kristine Gammer
Posted on November 8, 2015