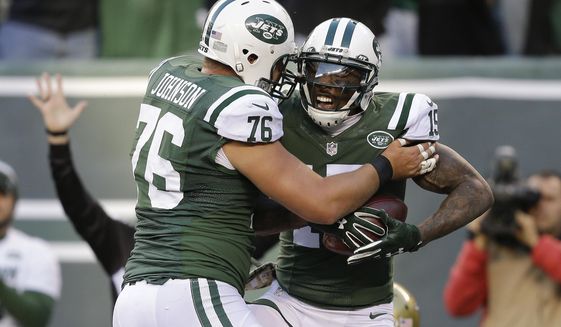 The Jets move to 5-3 on the season after a less than stellar game against the Jaguars. With a quick start the Jets jumped out to a 14-3 lead, but after a rash of injuries the Jaguars were able to get back into the game. Center Nick Mangold re-injured his neck and left the game. Immediately after Mangold’s departure and backup center Wesley Johnson’s arrival the offense committed two false start penalties. Other players who left with an injury were: Nick Folk, Antonio Cromartie, and Dion Bailey. While he wasn’t injured, Chris Ivory struggled again for a third game in a row. While there wasn’t great blocking, it’s rather obvious that Ivory is in a slump. Over the past three games Ivory has only managed 84 rushing yards. While he only had 26 yards rushing, Ivory had a pair of touchdowns. Fitzpatrick also had two touchdowns through the air, one to Brandon Marshall that ended up being the game winner.

Although the defense allowed nearly 440 yards of offense, they registered six sacks and forced four turnovers. Two of the turnovers were interceptions by Marcus Williams who had a huge bounce back game. While the defense was shaky at times with a depleted secondary, they made plays when it mattered. There were a number of impact players in this game. The impact players of the game included: Marcus Williams, Lorenzo Mauldin, Eric Decker, Brandon Marshall, Ryan Fitzpatrick, and Calvin Pace. The play of the game has to go to Calvin Pace’s strip-sack and recovery to keep the Jaguars from getting any points on a crucial drive. Other impact plays were: Fitzpatrick’s touchdown pass to Brandon Marshall, both of Marcus Williams’ interceptions, both of Lorenzo Mauldin’s sacks, Eric Decker’s touchdown catch, and Kenbrell Thompkins’ 38-yard grab.

With the Bills only one game behind the Jets, Thursday night will be a battle for second place in the AFC East. The Jets sit at 5-3 while the Bills are at 4-4, with a win the Jets can pull ahead with a two game lead but a loss would leave them at a tie with Buffalo. The tie would go to the Bills due to the fact that they currently have a 2-1 divisional record while the Jets have a 1-1 divisional record. With both teams still in the hunt for a playoff berth, it’s an important match up. Perhaps adding another layer to the match up is the return of former Jets’ head coach Rex Ryan, who claims the Jets are “just another opponent.” It will be interesting to see how Ryan’s return to MetLife Stadium plays out.

Earlier in the week the Jets activated safety Rontez Miles to add depth to the position without Calvin Pryor. Backup Jaiquawn Jarrett was placed on injured reserve earlier this season making the position even thinner than it already was. With Dion Bailey going down in the game against the Jaguars the Jets may look at other options depending on Bailey’s status going forward. If Bailey won’t be able to suit up Thursday night against the Bills, a look at the free agent pool may be in order.

While Ryan Fitzpatrick enjoyed one of his better games of the season, he may be looking at surgery this coming weekend. After suffering a torn ligament in his left hand thumb last week, Fitzpatrick will need surgery, it’s just a matter of when. It’s a possibility that he could have the surgery as soon as this Friday. With the game being Thursday night, it would give Fitzpatrick the most time to heal in between games this season. It gives Fitzpatrick an extra two days to heal. Another option is to just wait until the end of the season. Getting the surgery Friday is taking a calculated risk. If the stitches from the incision during the surgery aren’t healed, it creates the possibility of infection. It’s a situation that bears watching.

The Jets still have the option to activate cornerback Dee Milliner from the short-term injured reserve list before Tuesday. With the secondary becoming more and more depleted one would think they’d have to activate Milliner if he’s physically able to play. It’s interesting to see how the situation with Milliner has developed. Milliner has gone from being the number one corner on the depth chart to a corner fighting to get a spot on the 53-man roster. If he isn’t activated that says something about his future with the Jets.

The Jets are dealing with mounting injuries, and a number of them will likely have an impact on Thursday night’s game. The Jets will be hoping center Nick Mangold is able to play against the Bills, Mangold’s presence is crucial for the offense’s confidence and cohesion. A win Thursday against the Bills would help the Jets separate themselves from the pack in the AFC in the race for a playoff berth.