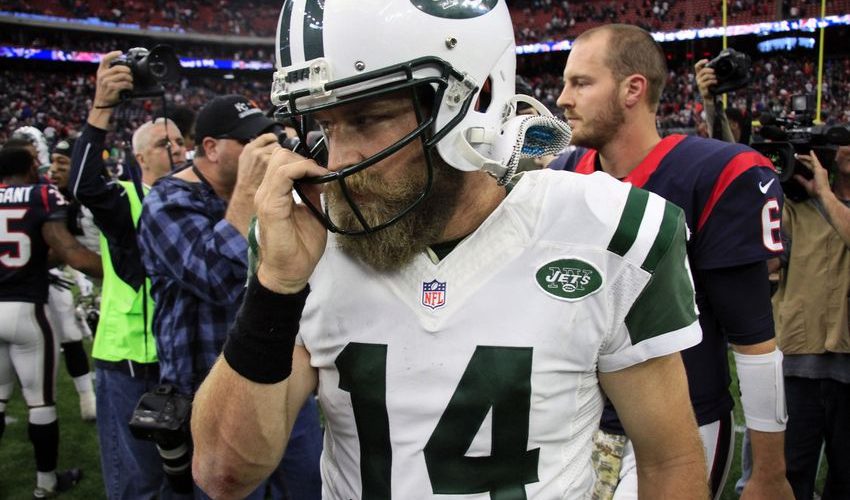 After an ugly game against the Texans the Jets fall to 5-5 on the season. It has been a 180 degree turnaround from the first five games of the season compared to the last five. After starting 4-1, the Jets have gone 1-4 in their last five.The first quarter of the game was a very slow defensive battle with Houston dominating the time of possession. The Texans ate up over 10 minuets of clock in two possessions, scoring on their second. The Jets only had one possession the first quarter and failed to get any points. In the second quarter the Jets forced a fumble on defense with a strip sack from Marcus Williams and were able to capitalize with a field goal making it 3-3. Then after a punting drive from both sides, DeAndre Hopkins had a 61-yard touchdown reception over Darrelle Revis making it 10-3. Then after two punting drives to start the second half, the Jets made it 10-10 after Chris Ivory’s fumble was reversed. Eric Decker drew a 44-yard pass interference call on the following play, setting up Brandon Marshall’s 21-yard touchdown reception from Ryan Fitzpatrick. After their touchdown the Jets allowed a touchdown pass on a trick play with wide receiver Cecil Shorts throwing to a wide open Alfred Blue making it 17-10. On the Texans’ next position they would score another touchdown on a 20-yard pass to DeAndre Hopkins making it 24-10. After four more punting drives between each side, the Jets closed the gap with a 73-yard drive and a six-yard touchdown rush by Fitzpatrick. That’s where the comeback story ends. With four minuets and 20 seconds left, Fitzpatrick squandered any chance the Jets had at a comeback with back-to-back interceptions.

While there were a couple of moments of relief this was a very difficult game to watch. Both the defense and offense struggled to find any sort of rhythm. While the offense had to face the likes of J.J. Watt, Vince Wilfork, Jadeveon Clowney, Jonathan Joseph, etc. it was somewhat of a head-scratcher to see the defense get dismantled by third-string quarterback T.J. Yates. It’s hard to find them again this week, but the impact players of the game were: Bilal Powell, Eric Decker, Brandon Marshall, Damon Harrison, Marcus Williams, and Leonard Williams. Bilal Powell was the real standout of the game, making some clutch plays coming off his injury. The plays of the game were: Marcus Williams’ strip sack and recovery, Brandon Marshall’s 21-yard touchdown grab, Fitzpatrick’s 6-yard touchdown rush, Ivory’s 23-yard rush, and Bilal Powell’s 25-yard reception.

How the Mighty Have Fallen

It was an overall bad performance in every aspect. Every player in green and white made mistakes at some point in the game, leaving room for improvement in just about every area. The most alarming takeaway from the Texans game though was how badly Darrelle Revis got burned by wide receiver DeAndre Hopkins on multiple occasions. Jets fans are aware of the struggles that come with cornerback Antonio Cromartie’s play style, but this was possibly one of Revis’ worst games of his career. Against Revis, Hopkins had four receptions for 98 yards, over half of them coming from his 61-yard touchdown reception after he left Revis in the dust. On one of the first plays of the game, Hopkins had around five yards of separation from Revis on what would have been a 69-yard touchdown pass, but T.J. Yates overthrew him. Revis left the game with a concussion during the third quarter. It’s too early to say Revis isn’t an elite cornerback anymore, but it seems his age may be catching up to him.

Quincy Enunwa made his return after serving his four game suspension for a domestic violence incident. He wasn’t exactly spectacular in his return, but he made a couple of solid catches and a nice block. Enunwa had two receptions on four targets for 22 yards. Due to his body size being somewhere in between a wide receiver and tight end, Enunwa likely won’t be going down field for any fade routes but will be asked to block on some plays. If he continues to develop Enunwa could earn himself the number three or four spot on the depth chart.

Both Darrelle Revis and Nick Mangold suffered injuries in the game against the Texans. Revis left with a concussion in the third, and Nick Mangold left early in the game with deep lacerations on his snapping hand. Revis could return next week, but it’s possible he could also miss a week with his concussion. As for Mangold, he is battling through multiple injuries. Mangold suffered a neck injury earlier in the season, and also has a hand injury separate from the lacerations he suffered on Sunday. The extent of the lacerations isn’t known, but Mangold did have to receive stitches for the wound. To lose two of their star players for next week’s game would be a huge blow for the Jets.

Devin Smith is becoming more of a liability than anything so far for the Jets. Last week Smith had a costly fumble that was recovered for a touchdown, which could be viewed as a game costing touchdown seeing as the score was 22-17. This week Smith didn’t turn the ball over, but he had two huge drops that could have helped his team score points. The biggest one should have been a 46-yard touchdown reception. Smith was targeted four times, and had zero receptions. Bowles expressed his frustration after the game with Smith and other rookies saying “Rookies have to stop being rookies. They need to grow up. They get paid like everybody else and they have to start acting like they’re not in college anymore.” If Smith doesn’t make some serious changes he could find himself on the bench in favor of Kenbrell Thompkins and Jeremy Kerley.

Sitting at 5-5, the Jets are a far cry from where they were when they started the season. Instead of ridding high with a 4-1 record, they are scrambling for answers as they look to claw their way back into the playoff race. The margin for error is significantly smaller now than it was last week. With the 4-6 Dolphins coming to town, the word “desperation game” is an understatement for this match up. If the Jets can snag a win they can begin an effort to turn the season around, if they lose their playoff hopes become very bleak.