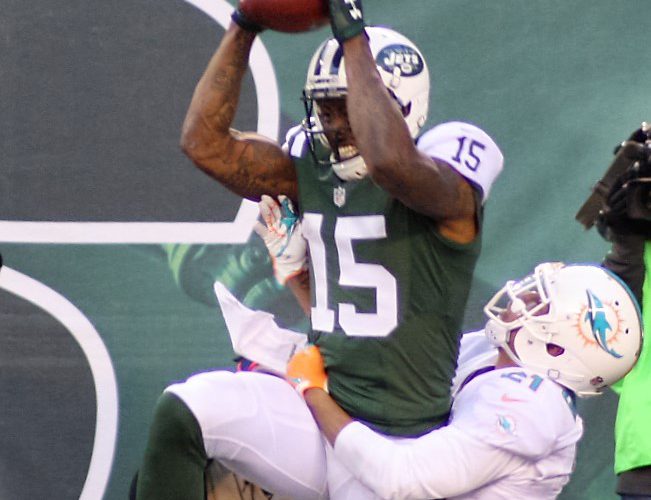 Following a decisive 38-20 victory, highlighted by Ryan Fitzpatrick’s four touchdown pass performance, two of which were to star receiver Brandon Marshall, the Jets find themselves in very unfamiliar territory among the top scoring offenses in the NFL. 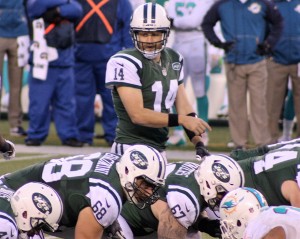 The  38-point output moved the Jets from 12th to 7th in scoring at 24.7 points per game while Fitzpatrick, who, barring injury, is on pace to top his personal best of 24 touchdown passes in a season turned in one of his best performances of the season.

Currently, the first-year Jets signal caller sits at 20 touchdowns with five games to play and has thrown at least one score in every contest this season with the exception of his 5-attempt game against the Raiders in which he tore ligaments in his non-throwing hand in the first quarter and was pulled.

Meanwhile, Marshall continues to be Fitzpatrick’s most dynamic target as he took full advantage of the 5′ 10” Brent Grimes, using his 6′ 3” frame to put up 11 receptions for 131 yards to go along with his two touchdowns. 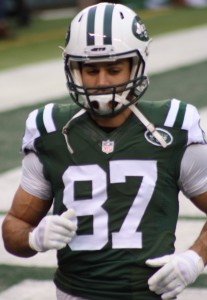 Fitzpatrick’s other scoring strike may have been the biggest of the day and the reaction from the team both on the field and the sidelines didn’t leave any doubt.

A 16-yard strike from Fitzpatrick to struggling rookie wide receiver Devin Smith was met with a jubilant response from teammates who have watched the youngster take plenty of criticism following a dropped touchdown last week  after coughing up a fumble that led to a score against the Bills one week earlier.

Smith’s score wasn’t only important in giving the Jets a cushion before the half, but it could serve as a confidence builder for a young receiver on a team that would benefit greatly by the emergence of a consistent third option.

So far this season the Jets passing game has been a three-man show.  Fitzpatrick, Marshall and Decker. Should Smith build on his performance moving forward, he could give the Jets offense the speed dimension that they’ve lacked for much of the season, the very reason Smith was chosen in the second round of the NFL draft.

On the ground it’s been Chris Ivory leading the charge for Gang Green, another player on pace to set a few career milestones of his own.  His incredible 31-yard touchdown rumble in which he shook off multiple Miami defenders was his seventh of the year, a new career high.  He’s also just 67 yards shy of beating his career best 833 yards rushing. 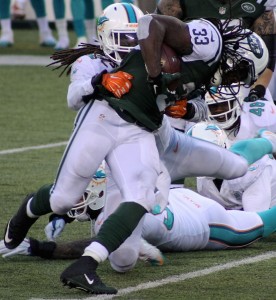 All of this has taken place with the play calling of offensive coordinator Chan Gailey and it has the Jets in position for just their fifth top-10 scoring finish since 1983, just under once per decade.

If the offense continues to produce at the rate it has, and the defense can be closer to the team it was yesterday against Miami as opposed to the previous week against the Texans, the Jets will be in good position as they sit at “1-0 with five more to play” as Todd Bowles put it in the locker room following yesterday’s win.

Next up, the 22nd ranked scoring defense in the New York Giants.  If the Jets turn in another top-10 type of offensive performance, the Jets should be looking at 2-0 with four more to play.