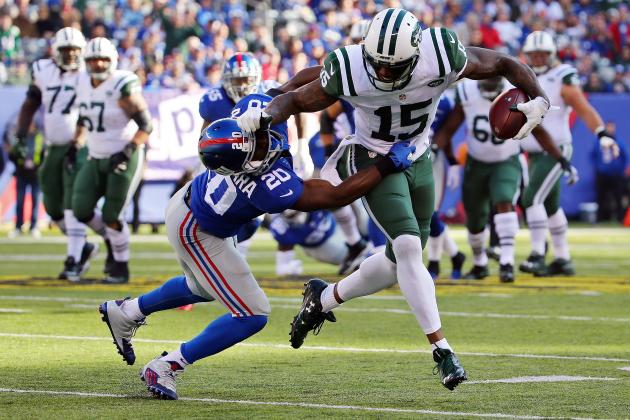 After Three Sloppy Quarters, Jets Turn it Around in Fourth to Fuel Overtime Comeback

The Jets’ game against the Giants on Sunday had the look and feel of their previous losses in which they stunk it up for three quarters, then turned it on in the fourth. The only difference this time was that they completed the comeback. The game started off slow with back to back three-and-outs, then the Jets were able to put together a promising drive but had to settle for a field goal. Chris Ivory carried the Jets on their first scoring drive, then was virtually phased out of the game being replaced by Bilal Powell. Ivory had three carries for 37 yards, and a reception for nine yards on the first drive. He finished the game with 10 carries for 47 yards and five receptions for 22 yards. The defense only allowed one first down on the Giants’ next possession, and got the ball back for Fitzpatrick and the offense. Other than a 32-yard reception by Quincy Enunwa, the drive was ugly. The offensive line allowed Fitzpatrick to be sacked twice. The next play changed the complexion of the game. The Jets special teams unit gave up their fourth touchdown of the season after allowing Dwayne Harris to return a punt 80 yards for a touchdown. After two more three-and-outs Chris Ivory coughed up the ball for a fumble on the first play of the drive. Luckily for Ivory the defense made a stand and held the Giants to three. The Jets would come back with a touchdown on a 9 play 79 yard drive capped off by a clever screen pass to Bilal Powell for a touchdown. Then came the play that was eerily reminiscent of the 99-yard touchdown reception four years ago. After two short passes to Shane Vereen, Eli Manning hit Odell Beckham Jr. for a 72-yard touchdown pass. The Jets allowed another field goal before halftime making it 20-10 Giants.

The second half started the same way the game began with back to back three-and-outs. Then, with a little help from Tom Coughlin’s decision to go for it on fourth down, Rontez Miles recorded his first interception of his career. The Jets would go on to have a long 12 play 80-yard drive, but ended with a field goal making it 20-13. The defense came up big on the next drive, forcing a three-and-out. Then, on a clutch drive Brandon Marshall came up with the game-tying touchdown reception, forcing overtime. The Jets received the ball first, and drove 61 yards in 13 plays but had to settle for three. Then the defense held the Giants to a 48-yard field goal attempt, which should have been routine for Giants kicker Josh Brown. Brown, who hadn’t missed a field goal on the season, hooked the kick to the left sealing the comeback victory for the Jets. It was a clutch performance from the Jets who finally pulled out one of their late-game comeback efforts. The impact players of the game were: Ryan Fitzpatrick, Brandon Marshall, Bilal Powell, Eric Decker, Rontez Miles, and Leonard Williams. The player of the game had to be Ryan Fitzpatrick who has shown real poise and leadership the past two weeks posting 667 yards passing, and six touchdowns with no interceptions. Sending the Jets into overtime, and propelling the comeback, Brandon Marshall’s 9-yard touchdown reception was the play of the game. Other impact plays were: Bilal Powell’s 25-yard touchdown reception, Rontez Miles’ interception, Chris Ivory’s 20-yard rush, and Leonard Williams, Mike Catapano, and Muhammad Wilkerson’s sacks.

After their stunning overtime comeback, the Jets have moved themselves back into the playoff picture. As of today the Jets control the sixth seed, or the second wildcard spot. If the playoffs were to begin today, the Jets would have a very fitting match up. It would be the sixth seed Jets playing the third seed Patriots. While they may be on the losing end of the rivalry, the Jets beat the Patriots in the playoffs during the 2010-2011 season to get to the AFC Championship game. With many teams in the playoff hunt at 7-5 and 6-6, the Jets will need to ride their momentum to string together some more wins if they want to maintain a playoff berth.

The Jets were hurting for their star cornerback in Darrelle Revis with Odell Beckham making big plays against a somewhat suspect secondary. Beckham finished the game with six receptions for 149 yards and a touchdown. Beckham’s biggest play came on the 72-yard touchdown reception in which he was wide open in the middle of the field while the defense was in loose zone coverage. It was an ugly play, the three closest Jet players were Marcus Gilchrist, Antonio Cromartie, and Demario Davis. Davis attempted to tackle Beckham from behind, but only ended up getting in the way of Cromartie who had the best chance to bring Beckham down. Gilchrist and Cromartie had no chance once Beckham flipped the switch. Revis is still recovering from a concussion he suffered against the Texans.

Brandon Marshall surpassed 1,000 yards on the season with his fourth team in his NFL career. Marshall’s 1,000 yard season also marks the first time since 2007 that the Jets had a wide receiver hit the 1,000 yard mark. The last wide receiver to hit the mark was Jerricho Cotchery who had a 1,130 yard season. Cotchery is currently enjoying a nice season with the undefeated Carolina Panthers. The Jets’ combination of Brandon Marshall and Eric Decker has proven to be one of the better wide receiver tandems in the league so far this year. The dynamic duo share 142 receptions for 1,863 yards and 18 touchdowns so far on the season.

Todd Bowles is making a name for himself as a no-nonsense head coach. Bowles sat Muhammad Wilkerson for the first quarter. During their post-game interviews neither Bowles nor Wilkerson would confirm the reason as to why Wilkerson was benched other than saying it was an “in-house” issue. During the CBS broadcast of the game it was mentioned that Wilkerson was late to a morning meeting and that was the cause of his benching. If that is the case it goes to show that no one will be spared when it comes to Todd Bowles’ discipline. Bowles’ no-nonsense culture is a huge turnaround from Rex Ryan’s loose regime.

After propelling themselves back into the playoff conversation, the Jets have a couple of “easy” games before playing two division rivals in the Patriots and the Bills. The Jets play the Titans and then the Cowboys before their final two games. The Titans and Cowboys have a combined record of 6-17. The next two games should be very winnable for the Jets, who need a strong finish on their season to make it into the playoff dance. A win over arguably their two biggest rivals would be a perfect way to enter the postseason.