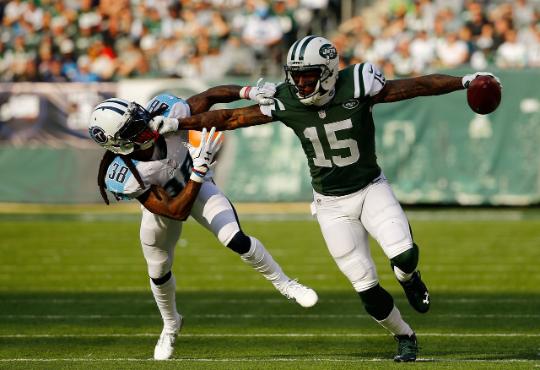 For the first time since 2011 the Jets have won three games in a row. The first half of the game was pure domination in every phase of the game. The Jets started the game quickly and drove 80 yards in 14 plays capped off with a 16-yard touchdown pass from Ryan Fitzpatrick to Eric Decker. The defense was able to force a three-and-out on the following drive by the Titans. After getting the ball back the offense wasn’t able to get into the end zone and had kicker Randy Bullock come on for the field goal attempt. Bullock had his first miss of the season with the Jets, just pulling it wide on a 53-yard attempt. The defense forced another three-and-out, and the Jets settled for another field goal attempt. Bullock capitalized on this one from 47 yards out. On the following drive Buster Skrine recorded his first interception of the season. After three plays Skrine grabbed an errant pass intended for running back Dexter McCluster, and again the Jets settled for three making the score 13-0. After another punting drive by the Titans, the Jets cashed in with another touchdown, Bilal Powell’s second touchdown reception of his career and the second in consecutive weeks. Another punting drive by Tennessee led to an odd play in which most of the Titans’ defenders were looking towards their bench due to communication issues. This left Brandon Marshall virtually uncovered, allowing him to catch a quick pass from Fitzpatrick and take it 69 yards for a touchdown. The following drive by Tennessee led to the end of the half. The Jets held the Titans to 72 yards of total offense in the first half.

If it wasn’t for a trick wildcat play in which running back Antonio Andrews hit Marcus Mariota for a 41-yard touchdown reception, the game could have easily been a shutout. Calvin Pryor tripped on the play, leaving Mariota wide open. The Jets’ offense wasn’t nearly as potent in the second half, only managing three points compared to 27 in the first. While the offense wasn’t as dominant, the defense was just as good aside from Pryor’s trip leading to the Titans’ only points. The defense forced a punt, turnover, or turnover on downs on 10 of the Titans’ 11 drives and helped the team clinch a 30-8 victory. The impact players of the game were: Ryan Fitzpatrick, Brandon Marshall, Muhammad Wilkerson, Eric Decker, Chris Ivory, and Buster Skrine. There were many candidates, but once again the player of the game this week is Ryan Fitzpatrick. Fitzpatrick has been nearly perfect over the last three weeks posting 930 yards passing, 66 yards rushing, and nine touchdowns to no interceptions. The play of the game had to be Brandon Marshall’s 69-yard touchdown reception, the play embodied the entire game showing how outmatched the listless Titans’ team was. Other impact plays included: Eric Decker’s 16-yard touchdown grab, Bilal Powell’s 16-yard touchdown grab, Buster Skrine’s interception, Muhammad Wilkerson’s three sacks, Leonard William’s sack, Demario Davis’ sack, Powell’s 24-yard run, Ivory’s 32-yard run, and Fitzpatrick’s 19-yard run.

Still Holding onto the Sixth Seed at 8-5

It’s a three horse race with only two spots available. As of right now, the Chiefs and the Jets hold the fifth and sixth seeds for the AFC playoff race respectively. Looming with the seventh seed are the Pittsburgh Steelers also sitting at 8-5. Other than a head-to-head record, the first statistic used in a tie-breaking procedure for wildcard teams is the team’s conference record. The Chiefs are sitting at 7-2 in the conference, while the Jets are 6-4 and the Steelers are 5-4. The Jets play two more conference opponents, while the Steelers play three. If both teams win out, that would mean the next tie-breaking statistic would be the common game win-loss record, meaning the teams that both the Jets and the Steelers have played. Those teams include: the New England Patriots, the Oakland Raiders, the Cleveland Browns, and the Indianapolis Colts. The Jets are 1-3 in those games while the Steelers are 3-1. So while the Jets hold the sixth seed at the moment, if all three teams win out the Jets will be the odd man out. This means that the Jets will need to win out and have one of the other two teams lose at least one game to keep a wildcard spot. With the way they’re playing now, it definitely seems possible.

Devin Smith’s turbulent rookie season may be coming to a close after a potentially serious injury. Smith was injured on a punt while trying to get around a blocker, and immediately fell to the turf after landing awkwardly on his leg. After he went to the ground, Smith was holding his knee in obvious pain. The medical staff took a quick look at Smith and then brought the cart out to bring him to the locker room. Todd Bowles stated that Smith will undergo an MRI to determine the extent of the injury. Smith has been largely ineffective during his rookie season recording only nine receptions for 115 yards and a touchdown on 28 targets. That’s less than 1/3 of his targets caught. Smith was also responsible for a potentially game costing fumble recovered for a touchdown against the Bills. Once they have the results of the MRI, it will likely be confirmed by the medical staff that Smith’s season will end how it began, with a serious injury.

Muhammad Wilkerson reached his career best in sacks for both a single game and a single season against the Titans with three and 12 respectively. With Wilkerson’s contract expiring after this season, and the way he’s been playing the Jets would be insane not to make every effort to retain him. If the Jets and Wilkerson can’t come to an agreement on a long-term deal, they will almost definitely franchise tag Wilkerson. In recent years Wilkerson has been snubbed for a Pro Bowl bid, but he seems to be a lock this season. It would be robbery if Wilkerson doesn’t make a trip to Hawaii in 2016.

The dynamic duo in Brandon Marshall and Eric Decker could make a case for the best wide receiver tandem in the league right now. Marshall (11) and Decker (nine) have a combined 20 touchdown receptions on the season, tied for best in the league along side Allen Robinson and Allen Hurns. The two have already tied the Jets all-time record for receiving touchdowns by a WR duo, but they still have three games remaining to set a new record. They could also become the first Jets WR duo to eclipse 1,000 yards receiving since Keyshawn Johnson and Wayne Chrebet did it in 1998.

As head coach Todd Bowles said, “it’s a one-game season now.” With three games remaining, the Jets will likely need to win all three of their one-game seasons in order to make the postseason. Sitting at 4-9, the Dallas Cowboy are on the outskirts of playoff contention but are still technically in the race with the division leading Washington Redskins at 6-7. Although their starting quarterback is done for the season, the Cowboys still have a number of play makers. The Jets will need to handle the Cowboys in the same fashion as they did the Titans if they want to maintain momentum heading into their huge match up with the 11-2 Patriots in week 16.