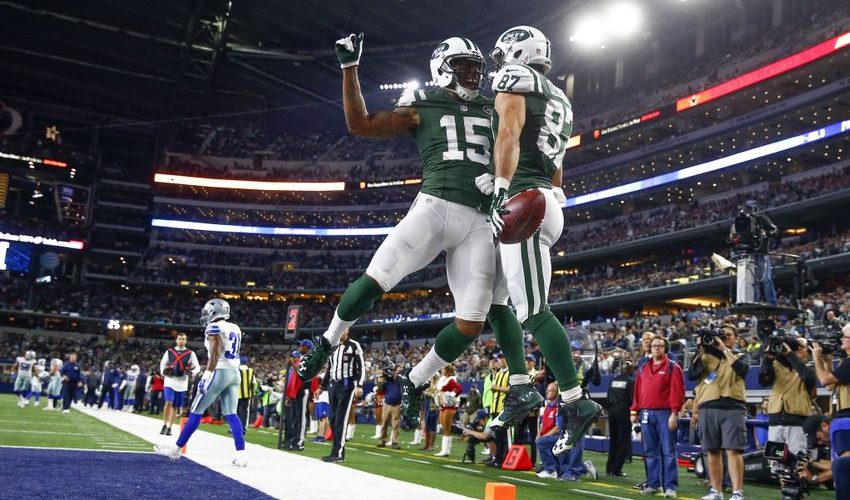 For the first three quarters of Saturday night’s game it looked as if the Jets might succumb to a lowly Cowboys team. For the second time in three weeks Ryan Fitzpatrick led the Jets to a fourth quarter comeback. The game started with a 9 play 70 yard drive, with nearly half of it coming on a trick play by Lucky Whitehead running a reverse and going for 33 yards. The Jets defense continues to struggle defending trick plays whether it’s a reverse or the wildcat. They stood up when it mattered though, and held the Cowboys to a field goal. The offense started with a three-and-out and Ryan Quigley’s ensuing punt was uglier than the three-and-out drive netting a paltry 25-yards. On the following drive Darrelle Revis was given a gift from Matt Cassel. Cassel was under heavy pressure and attempted to throw it out of bounds but didn’t see Revis in prime position to pluck the ball out of the air near the sideline. Revis recorded his fourth interception on the season. The Jets squandered a chance at points from Revis’ interception by going for it on fourth down at the Dallas four-yard line. They decided to do a quarterback sneak on a third-and-three, making it fourth-and-one at the four. Chris Ivory was stuffed for a one yard loss, giving Dallas the ball back on their own five-yard line. The defense held them to a three-and-out and forced a punt. On the following drive the Jets managed to put up some points, with a 60-yard drive capped off by a 12-yard Bilal Powell rush for a touchdown. Kicker Randy Bullock, who has been pretty solid for the Jets so far, missed the extra point making it only a three point game at 6-3. Then after two more punting drives, one by each team, the Cowboys pulled quarterback Matt Cassel for Kellen Moore. On the second pass of his NFL career, Moore threw an interception to safety Marcus Gilchrist. The Jets managed to get a field goal out of the turnover. After two more punting drives, the Kellen Moore led Cowboys drove for a touchdown making it 10-9.

On the last drive of the half, the Jets drove 52 yards in seven plays setting up a 40-yard field goal, one in which Bullock converted. After the kick, it was made clear that one of the referees threw his hat because he couldn’t find his flag. The penalty was against the Jets and made it a 45-yard attempt. Bullock missed the 45-yarder and the Jets went into halftime down 10-9. The Jets received the ball to start the second half, but ended up punting. The Cowboys looked to score on the following drive going for 76 yards in seven plays, but Calvin Pryor came up with a big interception in the end zone. After that, Fitzpatrick’s turnover-free streak ended at a bad time. Fitzpatrick threw an interception on his own 19-yard line. Luckily the Cowboys only managed a field goal out of the turnover. After two more punting drives, the Jets drove 70 yards on nine plays, and Eric Decker sealed the deal with a 3-yard touchdown reception from Fitzpatrick. The Cowboys came back with a field goal making it 16-16. With 1:55 left on the clock, Fitzpatrick led the Jets on a game-clinching eight play 58-yard drive. Bullock nailed the 40-yard field goal to give the Jets a 19-16 lead with 36 seconds remaining. On the second play of the last drive, Marcus Williams made an interception to end the game on a jump ball thrown up by Kellen Moore. The impact players of the game were: Ryan Fitzpatrick, Eric Decker, Calvin Pryor, Bilal Powell, Brandon Marshall, and Marcus Williams. There were many impact players for this game, but the player of the game was Ryan Fitzpatrick for the third week in a row. Even though Fitzpatrick ended his streak of no-turnover games, he still had 299 yards passing and a touchdown as well. He also led the team to a clutch late-game comeback for the second time in three weeks. The impact play of the game was Kenbrell Thompkin’s 43-yard reception from Ryan Fitzpatrick that set up the game-winning field goal. Other impact plays were: all four interceptions by Darrelle Revis, Calvin Pryor, Marcus Gilchrist, and Marcus Williams, Bilal Powell’s 12-yard touchdown run, Calvin Pace’s huge sack, Leonard Williams’ and Sheldon Richardson’s shared sack, Decker’s three-yard touchdown catch, and Quincy Enunwa’s 24-yard catch.

With a Kansas City and Pittsburgh Win, the Jets Move to Seventh Seed

After holding the sixth seed for the AFC playoff race last week, the Jets have lost some ground. The Jets have now moved down to the seventh seed due to both Kansas City and Pittsburgh winning and having the advantage in a three-way tie at 9-5 records. Any Jets fans watching the Denver-Pittsburgh game thought the Jets were going to maintain the sixth seed at halftime. The Broncos were leading the Steelers 27-13 at the half. After the half the Broncos were a completely different team, scoring no points on offense, and letting the Steelers put up 21 unanswered points. At this point, the Jets might have a better chance of getting the sixth seed if Kansas City overtakes Denver for their division. The Broncos have a tougher schedule than the Chiefs or the Steelers playing the Cincinnati Bengals and the San Diego Chargers. The Steelers play the Baltimore Ravens and the Cleveland Browns, and the Chiefs play the Cleveland Browns and the Oakland Raiders. That’s a combined 15-13 record between the Bengals and Chargers compared to 9-19 for the Raiders and Browns and 7-21 for the Ravens and Browns. Either way, the Jets will still need some help if they are going to make the playoffs. The Jets still do not control their own destiny, but if they win their next two games they only need a loss from Kansas City, Pittsburgh, or Denver. If the Chiefs and Broncos tie for their division, the Chiefs would win the tie-breaker. Which means if the Jets win out and are also tied with the Broncos they would take the sixth seed due to a better conference record. Basically, the Jets need to win their next two games and have one of the other three teams mentioned lose a game to make it.

Ryan Fitzpatrick’s three-game streak of no interceptions came to an end during a nail-bitter against the Cowboys on Saturday. Even though he turned the ball over once, he still had a clutch performance against the Cowboys. Over the past four games Fitzpatrick has thrown for 1,229 yards and 10 touchdowns with only one interception and nearly 100 yards rushing, not to mention two clutch fourth quarter comebacks. This begs the question, even if the Jets don’t make the playoffs, do they resign Fitzpatrick? If they do, what kind of a deal does he deserve? It will be interesting to see how the Jets manage the quarterback position heading into the offseason. They have a veteran in Fitzpatrick who has shown he can run this offense at a high level, the rookie Bryce Petty, and the potentially odd man out in Geno Smith. If the Jets do resign Fitzpatrick, it might make sense to see if there’s any market for Geno Smith.

Brandon Marshall and Eric Decker made history on Saturday night by surpassing the previous record for most receiving touchdowns set by a Jets wide receiver tandem. Eric Decker’s 3-yard touchdown reception gave them 21 on the season, passing the old record of 20 held by Al Toon and Wesley Walker and Don Maynard and Art Powell before them. Marshall also tied the team record for most receptions in a season by matching Al Toon’s 93 reception season. It’s highly likely that Marshall will set a new record with two games remaining in the season. With such an impressive duo at wide receiver, this is the best offense the Jets have seen in a long time. As of right now, the Jets have the 10th overall offense. Something they haven’t had in a long time.

After a somewhat shaky start to the season, the Jets’ defense seems to be coming together. The secondary grabbed four interceptions on Saturday against the Cowboys, and has held teams to an average of 16 points over the last four games. With the defense coming to a head, and a fairly steady offense the only area that needs significant improvement is special teams. Special teams had a solid game against the Titans, but had some less-than-spectacular moments against the Cowboys. In particular, punter Ryan Quigley botched a punt giving the Cowboys the ball on the Jets 43-yard line. There have been numerous other mistakes throughout the season that have hurt the Jets as well. If the Jets want to win their next two games and make the playoffs, coach Bobby April will need to have the special teams unit running at peak efficiency.

The New England Patriots will come to MetLife Stadium on Sunday in what will be a massive game for the Jets. The Jets played the Patriots close in their previous match up losing 30-23. This time there’s have no room for error. The Jets will almost definitely need to win their next two games to make the playoffs. It starts this coming Sunday against their bitter rival, and ends the following Sunday against their former head coach’s squad. Rex Ryan’s Bills were eliminated from the playoff race with a loss to the Washington Redskins. Ryan would love nothing more than to keep his old team out of the playoffs. The next two games will be tough ones for the Jets, but they will need to show their mettle if they want to get into the playoff dance.