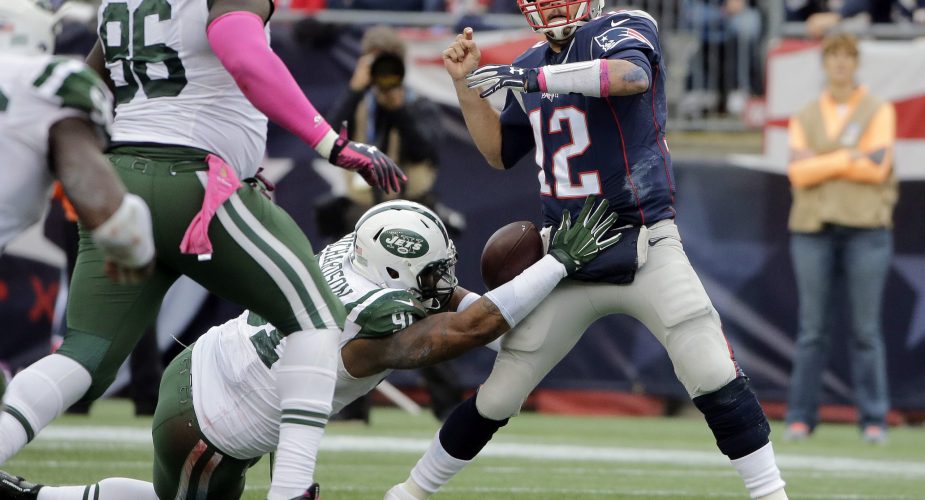 The New York Jets beat the New England Patriots in overtime and they now control their own playoff destiny. With a win next week against the Buffalo Bills, the Jets are guaranteed a wildcard spot. Kristine Gammer is celebrating the Jets win and her recent engagement; congratulations Kristine. So here are some some updates from the game, along with the post game notes (below).

Since holding a 5-5 record following their Week 11 loss at HST (11/22), the Jets have won their last five games to improve their record to 10-5. This marks the first 10-win season since 2010, when the team finished 11-5, as well as the first five-game streak since winning Week Two through Six  of that same season.

Marshall recorded his ninth 100-yard performance of the season, matching a team record set by WR Don Maynard (1967), and the 43rd such game of his career. His two touchdowns, the second game this season he’s caught at least two touchdowns, improved his season total to 13, surpassing his previous high of 12 set in 2013 with CHI.

WR Eric Decker sealed the overtime win when QB Ryan Fitzpatrick connected with him on a six-yard touchdown pass. The touchdown marks his 11th touchdown of the season, two shy of his single-season best of 13 established in 2012. With his three catches for 47 yards, Decker increased his season totals to 75 receptions, 977 yards and 11 touchdowns, bettering his 2014 totals with the Jets in all categories.

QB Ryan Fitzpatrick finished the game 26-oif-41 for 296-yards and three touchdowns with no interceptions for a passer rating of 109.4. His career-high 29 touchdown passes have tied the club record set by Vinny Testaverde (1998).

During the team’s five-game winning streak, Fitzpatrick has completed 131-of-203 for 1,525 yards and 13 touchdowns wit one interception for a passer rating of 106.5. In three of the last four games, Fitzpatrick has driven the Jets to a win in the final two minutes of regulation or overtime.

In overtime, WR Quincy Enunwa helped set up the game-winning score with a 48-yard pass from QB Ryan Fitzpatrick. The reception, the longest of his career, set the Jets up at the NE 30-yard line, with the Jets scoring two plays later. Enunwa finished the day with two catches for a career-high 69 yards, surpassing his career high of 50 yards set vs. PHI (9/27).

DL Sheldon Richardson recorded his fifth sack of the season by bringing down Tom Brady for five yards in the fourth quarter. In his 10 games played, Richardson has notched 3.5 of his sacks against division opponents this season, notching two against Brady.

CB Darrelle Revis intercepted a Tom Brady pass in the third quarter, giving the corner five for the season, his highest total since 2009. The takeaway is his team-leading eighth of the season (five interceptions, three fumble recoveries).

LB Lorenzo Mauldin recorded his fourth sack of the season when he took down Tom Brady for a five-yard loss in the third quarter, the most by a Jets rookie since former DE/LB Quinton Coples registered 5.5 in 2012.