Will Jets Keep it in the Family With Draft Day QB Selection? 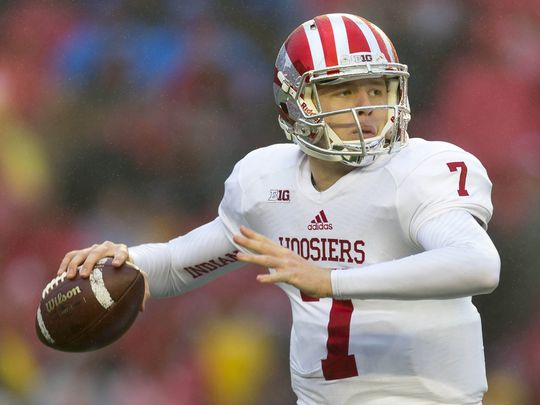 Whether or not the New York Jets re-sign last season’s franchise record-setting quarterback Ryan Fitzpatrick, it wouldn’t come as a shock to anyone if General Manager Mike Maccagnan selects a quarterback at some point during the NFL draft.  Barring a tag-and-trade deal of defensive Muhammad Wilkerson, the Jets are unlikely to see any of the drafts top signal callers fall to the 20th pick.

With that being the case, we could see a scenario similar to that of Maccagnan’s first draft, when he moved up in the fourth round to select Baylor quarterback Bryce Petty as a developmental prospect.

This year’s list of second and third-tier quarterbacks feature a name that should be familiar to Gang Green as Jets back-up tight end, Zach Sudfeld’s younger brother, Nate Sudfeld.

Much like his older brother Zach, Nate is a towering presence as the pair check in at 6′ 7” and 6′ 6” respectively. Zach missed all of the 2015 season after suffering a knee injury during camp with the Jets, while Nate finished up a stellar college career as his 27 TD’s and 7 INT’s brought his career totals to 61 scores to 20 picks. 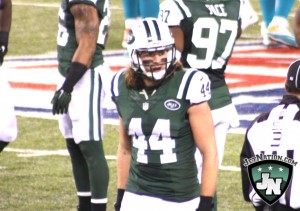 Will Zach Sudfled be catching passes from his younger brother in 2016?

Facing Michigan State, the 7th ranked team in the country, Sudfeld kept an out-manned Indiana squad competitive through the first three quarters as they trailed 28-26 before the Spartans reeled of 24 unanswered points in a 52-26 loss.

Sudfeld’s offense stalled out in the fourth quarter which is somewhat concerning, but most encouraging is the fact that his stat line (22-37, 308 yds, 3 TD’s, 1 INT)  wasn’t the result of compiling numbers against a backed-off defense in a blowout loss, but quality play while the game was still winnable.

Even with gaudy college production, the knock on Sudfeld is that his mechanics do need some work, and like many young quarterbacks, he struggles with consistency.  This was evident during the East-West Shrine game when Sudfeld struggled in going 6-13, but did manage to throw a score without an interception.

NFL Network’s Mike Mayock singled out Sudfeld as a prospect he felt could be a successful quarterback with the right coaching staff.  Given Jets offensive coordinator Chan Gailey’s success in working with young QB’s, could that make Sudfeld an option for the Jets?

Steps onto the field with terrific NFL size. Three-year starter who lead Big Ten in yards per pass play at 8.2 yards. Comfortable operating in timing based systems and shows ability to throw with desired anticipation. Ball usually comes out on time. Able to expedite throws when pressure finds him early. Feels pressure and gets rid of the ball over taking the sack. Makes catchable, accurate throws from the pocket. Shows off NFL arm when he steps and drives to target. Does not fear the field side throws and has arm and accuracy to make them. Puts plenty of air under touch throws allowing receivers a chance to make a play. Showed off consistent touch on deep corners. Competitive as a runner and lays out for first downs over sliding early.

Sets up with a very wide throwing base and slight dip in his delivery. Rarely gets full hip rotation through delivery forcing him to push throws. Touch in close quarters is below average. Field vision is only average. Inconsistent with reads against zone coverage. Makes up his mind and opts for tougher throws over open throws. Struggled in this way against Iowa. At times, rushes throws over sliding in pocket waiting for routes to develop. Saw substantial dip in completion percentage when rushed by five-plus defenders. Underthrows were culprit with deep ball accuracy. Not much of a threat with his legs.

“I love his size and he made that senior jump that we like to see. He takes you on a ride because one week you really like him and the next time you see him you see a career backup at best. I’ve got an average backup grade on him, but we’ll see what our coaches say about him.” — AFC West scout

Veteran quarterback with the desired frame for the position and coming off of his best year yet. Sudfeld tends to push the ball rather than deliver with a clean weight­ shift and follow through, creating inconsistencies with accuracy and velocity. There is some solid tape on Sudfeld that could give NFL teams hope, but issues with making the right reads will work against him.

While big brother Zach has a good shot to stick with the Jets next season as the tight end position is depleted and brought quality special teams play in 2015, could we see a family reunion of sorts if the Jets opt to take his “little” brother in Chicago on draft day?
Stay tuned.