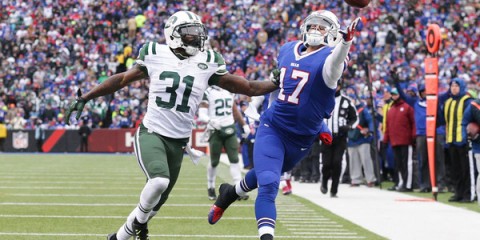 Antonio Cromartie’s return to the Jets lasted only one season, he was released from the team a week ago. The move saved the Jets $8 million dollars in cap space as Cromartie’s contract wasn’t guaranteed after his first season. On Sunday, NFL Network’s Ian Rapoport reported that Cromartie has a visit scheduled with the Buffalo Bills and his former head coach Rex Ryan. Cromartie played under Ryan from 2010 to 2013 with the Jets and recorded 160 total tackles, 13 interceptions, and 51 passes defended through those four seasons. Cromartie’s most recent season with the Jets was a far cry from his last tenure. For the first time since his rookie season, Cromartie failed to record an interception and put up only 29 total tackles, with 12 passes defended. Pro Football Focus rated Cromartie 103rd among 118 active corner backs in 2015. As Rapoport broke the news of Cromartie’s visit on NFL Network, Cromartie was actually a guest on the set and was asked what he thought about the report, Cromartie replied “That would be a great opportunity for me, I played for him for four years. He’s doing something good up there in Buffalo to try to get that organization turned back around.” After Cromartie’s release head coach Todd Bowles was asked who would replace Cromartie at the NFL combine. Bowles said that there will be an ‘open competition’ at the position and mentioned Buster Skrine, Marcus Williams, and Dee Milliner as possible replacements. Bowles also didn’t rule out the possibility of a replacement through the draft, free agency, or even bringing Cromartie back.

Under the CBA (Collective Bargaining Agreement) between the NFL and the NFLPA each NFL club has the option to carry over any unused cap space from the previous league year. The Jets opted to carry over the full unused amount of salary cap from last season, $2.48 million. The NFL hasn’t released the official salary cap for the 2016 season, but it is expected to exceed $155 million dollars, nearly a $12 million dollar increased from last season’s cap number. The carry over would set the Jets’ overall cap at $157.75 million dollars. The carry over money, and the recent release of corner back Antonio Cromartie gives the Jets just under $22 million dollars in cap space. Under the CBA, teams are required to spend an average of 89% of their salary cap each season and 95% of their available salary cap over a four year period from 2013 to 2016. Some teams have already met their cap requirements from the CBA. The Denver Broncos, Los Angeles Rams, and New Orleans Saints only carried over fractions of their excess cap money. The average carry over amount was $6.4 million dollars, the Jacksonville Jaguars led the way with $32.7 million carried over.

Recently Todd Bowles mentioned to reporters at the combine that he had a benign growth removed from his throat after the season. The growth was discovered during the season but Bowles was told not to worry seeing as the growth was benign and posed no real threat to his health. Once Bowles was aware there was no rush, he decided to wait until the end of the season to have the surgery to remove the growth. When asked, Bowles said the growth was “almost the size of a golf ball,” he also stated that he couldn’t speak after the surgery. Regarding why he got the surgery if the growth wasn’t malignant he said: “It was pressing up against the artery, and I had trouble swallowing a little bit. I didn’t want to get it done during the season, if something went wrong. So I just waited until after the season.” The surgery won’t require any post-surgical treatment.