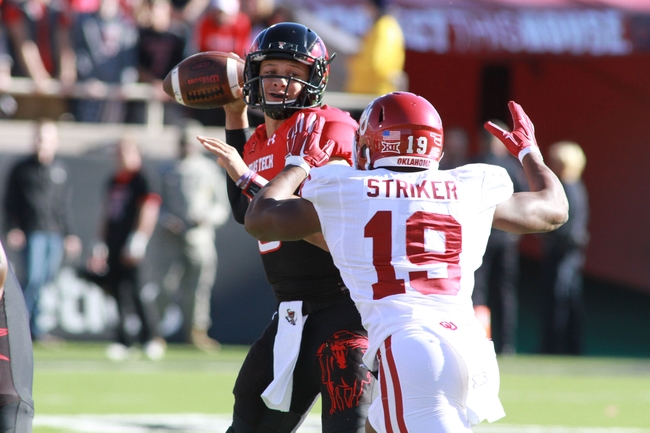 Not to say that NFL edge rushers ever went out of style, but given the emergence of some of the most prolific passing offenses in the history of the league, it’s never been more important to be able to find a player who can consistently pressure the quarterback when called upon to do so.

Outside linebacker Von Miller and the Denver Broncos recently won the Superbowl by beating some of the best signal callers the league has to offer, and they did it by pressuring and hitting the likes of Tom Brady and Cam Newton on a frequent and recurring basis.  Not since the days of John Abraham have the Jets had an edge rusher who posed a consistent threat to opposing quarterbacks, and like many teams, such a player will be a high priority this off-season.  Enter Oklahoma’s Eric Striker.

Built more like a safety at 5′ 11”, 226 lbs, striker is a player who has divided the scouting community when it comes to finding the “right fit” for the former Sooner who has shown the ability to be an absolute terror when getting after the quarterback.  His size however, has prevented him from being viewed as a surefire first round choice in the upcoming NFL draft.

In 39 collegiate games, Striker posted 22.5 sacks and he did it with a first step that often put him in the opponent’s offensive backfield just as their offensive tackles was coming out of his stance.  A trait that hasn’t gone unnoticed by some of the league’s most respected talent evaluators.

In a lengthy piece about Strikers dynamic playmaking ability, Todd McShay had this to say about the Tampa, Florida native:

“He reminds me a lot of Von Miller at Texas A&M,” ESPN analyst Todd McShay said during Oklahoma’s 31-26 win over Texas on Oct. 11. “Eric Striker is the type of guy that you have to account for in the rush, but also he’s so athletic, he can drop off in coverage.”

High praise without a doubt, comparing any player to Miller, the Super Bowl’s reigning MVP, is sure to open the eyes of anyone unfamiliar with Striker’s rare physical attributes, and it should.

Striker put himself on the map during the final game of his sophomore campaign.  Squaring off against perennial powerhouse Alabama in the 2015 Sugar Bowl, Striker dominated, registering three sacks in Oklahoma’s 45-31 throttling of the Crimson Tide.  He would go on to post impressive numbers against some of the country’s top programs, picking up multiple sacks and tackles for loss against TCU, Texas, Clemson and West Virginia.  All ranked opponents with the exception of the Longhorns.

None of this makes Striker the perfect prospect, because hes’ far from that.  His frame makes him a  player who struggles to get off of a block once an offensive tackle gets his hands on him, but that’s easier said than done given Strikers elite first step.

In regards to his size, Pete Prisco had this to say in an interview with JetNation.com during the NFL combine in Indianapolis, “I love Eric Striker.  I don’t care if people are going to downgrade him for his size, but when you put in tape, Eric Striker is always in the backfield.  He’s quick and athletic.  He won’t be a dominant pass-rusher, but you can use him in certain situations to get to the quarterback and some people are really going to miss on him.  There really is no ‘front-7’ in the NFL anymore, you move people around so much and he’s a guy who can be a good piece for somebody”.

NFL Network analyst Mike Mayock had a similar take on Striker when I asked for an opinion on the defender during his Indy press conference and he liked his ability to get to the quarterback.  “He’s hard to grade because he has safety size, but the best thing he does is come off the edge and get after the quarterback.  I see as a good fit with a dome team.  Like I said, your sub packages are used 70% to 80% of the time and he could be one of those situational guys”.

CBSSports.com‘s summary of Striker does a good job of noting his strengths and weaknesses, while also emphasizing just how torn evaluators are in weighing his explosiveness off the edge, versus his undersized frame.

STRENGTH: A natural playmaker boasting terrific awareness, agility and closing speed to prove a consistent threat off the edge. Anticipates the snap count well, exploding past offensive tackles with his initial burst. Uses his short stature as an advantage as a pass rusher, dipping under the reach of would-be blockers and showing good flexibility to turn the corner.

Striker has above average pursuit speed with the initial quickness to beat blockers to the corner, forcing holding penalties as a pass rusher. Showed encouraging awareness and overall fluidity in coverage during linebacker drills at the Senior Bowl. He has also done a better job staying patient, making the correct reads and controlling himself on the move to finish tackles. Plays with the maniacal style conducive to special teams.

While there will be plenty of concerns over his size, Striker has shown toughness and durability at Oklahoma, playing in all 52 games of his career and starting the last 39 consecutive games for the Sooners while also electing to participate in the Senior Bowl.

WEAKNESSES: Comes with obvious size limitations. Possesses a short, compact frame, including just 31″ arms. While he possesses terrific snap anticipation and agility to elude would-be blockers, Striker is too easily when opponents are able to latch on. Frankly, once blockers get their hands on him, he’s usually done.

Was rarely asked to drop into coverage at Oklahoma, knocking down more passes out of the hands of quarterbacks at the line of scrimmage than breaking them up downfield over his career, recording just one interception and 11 total passes broken up in 52 games.

IN OUR VIEW: A polarizing player in the scouting community. He is a dynamic athlete with a versatile skillset who could land him in the early rounds, but his lack of size and muscle lead to fit concerns at the next level.

Striker’s limitations could make some team very happy come draft time.  He’s been projected anywhere from a bottom of the first round choice to a 4th round pick.  As Prisco said, some teams are going to miss out on Striker.  Will the Jets be one of them, or will Todd Bowles’ creativity on defense make Striker a valuable early round chess piece for Gang Green?  We’ll have our answer when the NFL draft wraps up in Chicago on April 3oth.